As She Cross-Carpets to NPP; GDC Wishes its Former Executive Member Good Luck

The Gambia Democratic Congress (GDC) has wished one of their executive members good luck as she decides to pitch tent with President Barrows National People’s Party (NPP).

Aji Ndey Njie the former Second National Women’s President in the GDC made her decision to support the NPP after a meeting with President Adama Barrow. 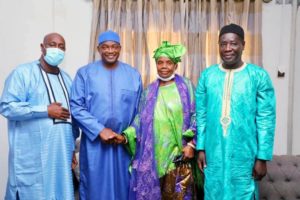 Although her defection would be felt by her party, GDCs National Youth President MC Cham Jr said they wish her good luck and as a party, they are unstoppable and are looking forward to winning the December election.

“She left GDC today after meeting with President Barrow. GDC would like to wish her good luck. However, we are unstoppable and are looking forward to winning the election in December,” MC Cham Jr said.

Aji Ndey Njie is the latest high-ranking GDC official to join the NPP. This comes a few weeks to the presidential election where NPPs President Barrow is seeking a second term.

- Advertisement -
Share
Facebook
Twitter
WhatsApp
Linkedin
Viber
Previous article100 Years After its Discovery, Insulin Still Out of Reach for Many Living with Diabetes
Next article“We Are Not Going to Endorse Any Political Party” -Ebrima Tabora Manneh.