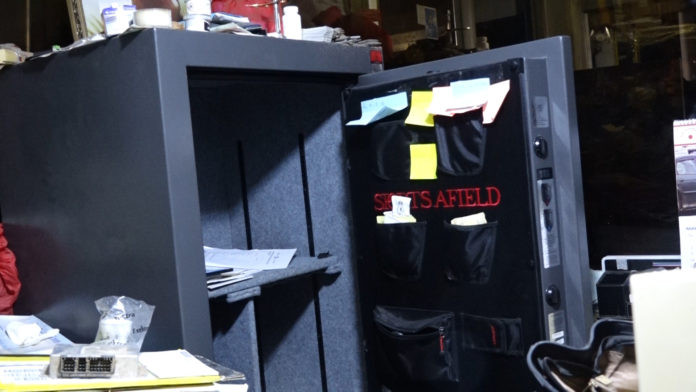 A burglary incident in old Jeshwang has left many in the community in a state of trepidation amid a surge in thievery, murder, among other criminal activities in the country.

The Bourgi family woke up to their worst nightmare on the night of May 15th when armed men breached their property which houses them and their auto spare parts shop, leaving with an approximate whooping amount of D16 Million.

A group of six men allegedly forced its way into the burglar-proof house after breaking one of the windows. Starting from the family’s rooms upstairs, the burglars ransacked the entire apartment looking for anything valuable they could steal.

The head of the family identified as Walid Bourgi was home at the time of the incident with his three daughters. Walid Bourgi recalled shots being fired in the air, bound, gagged and mercilessly beaten by the armed men.

A traumatised Bourgi explained: “I wanted to use the restroom and once I entered, I started hearing noise. So, my daughter came next to the door and asked if I was hearing this noise. I asked her if she knew where it was coming from, but she said no. And then suddenly she screamed, and someone opened fire.

“That is when I jumped from the toilet and when I opened the door of the toilet, the guy was straight in my face. I locked the door immediately and called my son, but he did not answer, so I pretended that I was talking to him, asking him to come home because we have thieves in the house to scare them off.”

The burglars became enraged at Walid’s attempt to scare them off and that was when the assault on him and his three daughters began.

“They broke the door of the toilet, entered and started hitting me and my daughters. They were mostly hitting on me. And they started throwing everything out of the cupboards. They found about D20,000 in my daughters’ cupboards and their gold which they also took,” he explained.

The rage did not stop as the armed robbers had a bigger plan in mind which was to access the safe in the shop where hard currencies were kept. But first they will have to overpower the male in the house by torturing him, forcing one of the daughters to use her survival instincts, leading them exactly where the cash was.

“They tried to drag me downstairs. Then they saw that I was pushing and pulling with them. They brought me in again. They took my watch and my phone from me. When they brought me back inside, they silo taped my daughters’ mouth and their hands, and they started hitting me. That was when one of my daughters gave them signs that she will lead them to the safe. She was not happy with what they were doing to me. So, she led them downstairs, opened the safe and they cleared everything,” Bourgi recounted.

Whilst everyone tried to wrap their head around what happened, some are left wondering how the armed thieves made it into the property even when it was burglar-proof, with cameras mounted at every angle.

“They were about five to six people. Some stayed with us and some went downstairs. And some were even down waiting in the car. They turned all the camera’s off and took the decoder with them. They removed the whole recoding system for the CCTV, cut the wires and removed everything,” Bourgi said.

Asked in monetary value how much the burglars got away with; Walid dropped the shocker.

‘’They went with a watch also (Rolex watch) worth about USD20,000 and some gold. They also went with Dollars, Euro, CFA and other hard currencies. If you want to put them equivalent to dalasi, they are almost about D16 Million,” Bourgi said.

Walid Bourgi said crime has become prevalent in the country, adding that recent times and trends have become scary.

“This is becoming profoundly serious. If these people can break your burglar-proof [home], enter your house while you are awake and bring weapons with them, threaten you, hit you, I am afraid it will get to a point when they strike during the day. The pestle they had, maybe it was not real, but it looked like a real pestle and sounded like one. I did not see any holes, that is why I assume it was artificial with rubber bullets. But in the future these people will come in with real weapons and it will be more dangerous,” he said.