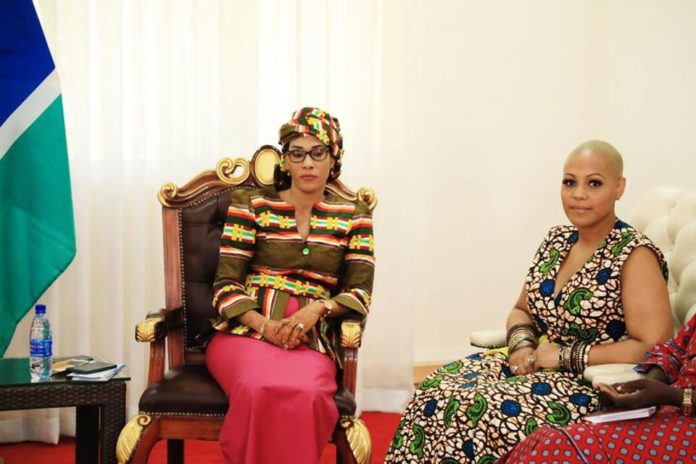 Anita Hawkins has said that women in The Gambia and the United States face similar challenges.

The top US businesswoman  and a philanthropist stated this on Tuesday after a meeting with the First Lady of The Gambia Fatoumatta Bah Barrow. The meeting forms part of her engagements aimed at helping Gambian women who were victimized.

According to Anita, she felt inspired to help Gambian women after her meeting with the First Lady.

She added: “You have women that are here in Gambia that are fighting so hard, that are struggling, that have so much passion and so much drive to make it and of course they have the same issues that we have in the United States, they are battling with abuse, teenage pregnancy.”

Meanwhile Anita on Wednesday held talks with officials of the Network Against Gender Based Violence in Kanifing.

“The challenges that you have here it’s difficult but at the same time, they are here and working hard every single day. So you still see the passion and the drive and the focus of what they want to see happen in the community and there is a community of women and children who are affected and I have learned so much today,” she said.

She added; “I hope that sometimes soon that those things are enforce, that is not a challenge and the only thing these organizations have to worry about is funding and making sure that they have the space, because the knowledge is there, getting every thing they need but again less challenges.”

Fallu Sowe, the Program Manager of Network Against Gender Based Violence highlighted that child marriage is still an issue and in 2016 the government of the Gambia  enacted a law abolishing child marriage.

He added the previous national study that was conducted on the issue of child marry has showed that 41 percent of Gambian women went through child marry.

Haddy Mboge Barrow founder of Network Against Gender Based Violence says that she will continue to work for women and girls in this country until the status core is change.

“I have the passion to do this because of my story, am from a village where the community believe in values and culture, so if these cultures maybe hindrance to the development of the young children especially the girls in particular which is child marriage, FGMC,” said Mboge.