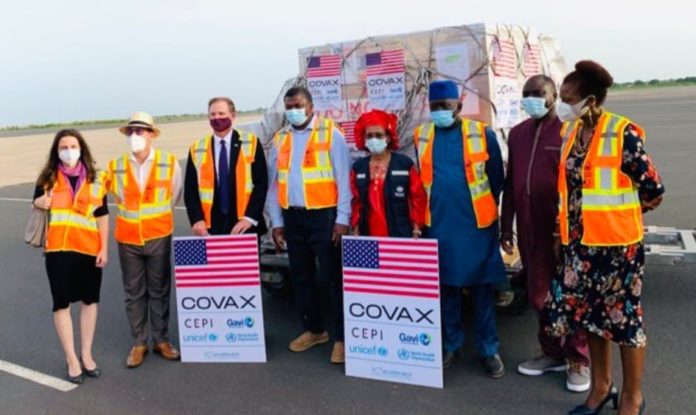 The United States has donated a total of 151,200 doses of the Johnson & Johnson/Janssen (J&J/Janssen) COVID-19 vaccine to boost the national vaccination campaign currently underway.

With the support from the COVAX Facility, the vaccines arrived in the country on Tuesday, 20th July 2021 and were received at Banjul International Airport by officials of the Ministry of Health, other Government Officials and Development Partners, a press release by the health ministry said.

The contribution of the Government of the United States comes at a moment when COVID-19 cases are escalating rapidly in The Gambia as more than 925 positive cases have been confirmed between 23rd June and 16th July. Since the confirmation of the first COVID-19 case in March 2020, The Gambia has registered a total of 6,920 cases and 190 deaths.

“President Joe Biden committed that the United States will be an “arsenal for vaccines” and we are pleased to partner with the African Union, COVAX, WHO and UNICEF to support the Gambian government’s vaccination efforts led by the Ministry of Health. This initial delivery from the U.S. contribution of over 304,000 doses of the single-dose Johnson & Johnson vaccine – on top of $2 billion provided by the United States to COVAX in April to buy vaccines for the world – is only the beginning.

We will continue to donate surplus vaccine supply, as it is available to us, and we will soon begin delivering on our contribution of 500 million Pfizer doses for distribution by COVAX to countries around the world, including The Gambia. Only by working together – and by getting vaccinated! – can we combat and end the COVID pandemic,” said H.E Richard Carlton Paschall III, U.S. Ambassador to The Gambia, according to the press release.

The J&J/Janssen COVID-19 vaccine has been approved by the World Health Organization under the Emergency Use Listing (EUL) as well as by the Gambia Medicines Control Agency. This donation will significantly close the gap towards achieving the national target of vaccinating 60 per cent of the population by June 2022. In order to urgently scale up the COVID-19 vaccination program, the Ministry of Health will immediately introduce the J&J/Janssen vaccine into the nationwide campaign which is currently underway and implemented in communities and health facilities across the country, as well as in different strategic locations such as bantabas, points of entry and other identified areas.

Gordon Jonathan Lewis, UNICEF Representative, underscored that “this generous contribution of shared vaccines from the Government of the United States will go a long way towards achieving vaccine equity in The Gambia and will ensure that we can vaccinate a larger number of individuals in a shorter period of time, especially now that new cases are rapidly rising. Getting vaccinated is the right thing to do, getting vaccinated is the ethical thing to do.”

Dr Desta Tiruneh, WHO Representative, added that “WHO welcomes the substantial contribution of vaccines from the Government of the United States through COVAX at a time when The Gambia is witnessing a significant spike in the number of COVID19 cases. Global vaccine sharing is the only way we can vaccinate at least 10% of the population of every country by the end of September 2021.”

In receiving the contribution, Minister of Health Dr. Ahmadou Lamin Samateh, noted that “The Gambia is currently witnessing its third wave of the epidemic and therefore this donation could not have come at a better time. These vaccines will not only complement our national vaccination program but also strengthen overall preventive public health measures. On behalf of our government, I extend our sincere appreciation to the United States of America, through the U.S. Embassy in The Gambia, for its significant contribution of lifesaving vaccines to our people, as well as to our development partners – WHO, UNICEF, GAVI, CEPI and WB – for their continued technical and financial support towards the country’s COVID-19 response.”