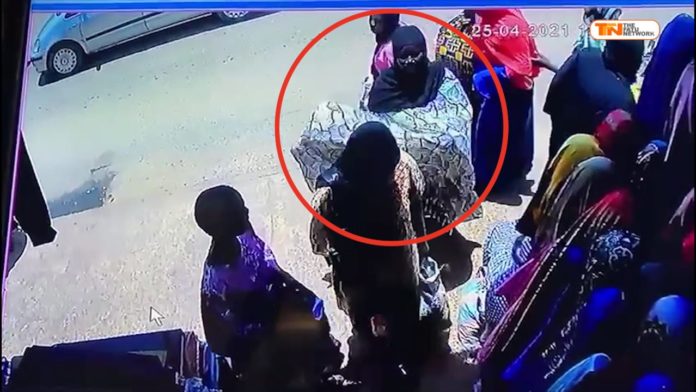 Two women security cameras caught shoplifting at a store in Serrekunda have been arrested by police.

The Fatu Network this week broke the news of two women wearing veils and the Muslim Abaya dress entering a family store and stealing a bag containing money.

On Sunday, police issued a statement that the suspects have been arrested.

Police said: “Following shocking media reports of a viral CCTV footage of two veiled women shoplifting in a clothing store at Serrekunda market, the Inspector General’s Office hereby informs the public that there is a breakthrough. The suspects have now been identified and arrested.

“On Saturday 1st May 2021, Police received a complaint that over D200,000 was stolen from a garment shop at Serrekunda market. The complainant alleged that CCTV surveillance captured two unidentified women in veil believed to be the suspects. Police swiftly opened up an investigation into the matter.

“Preliminary investigations revealed the two  veiled suspects to be Kumba Secka and Mai Baldeh. During investigations, Police also recovered some One Hundred and Twenty Eight Thousand Fifty Dalasis ( D128, 050. 00) and several new clothes bought by the duo probably from the stolen money.

“They are currently helping Police in their ongoing investigations to recover the rest of the stolen items.

“The public is further informed that appropriate actions will follow in accordance with the Laws of The Gambia.

“The Inspector General of Police urges people to desist from stealing and all forms of crime particularly as we draw closer to the Koriteh feast.

“Meanwhile, Police detectives and patrol officers are deployed all over and any individual found wanting will be prosecuted.

“The IGP wishes to convey his gratitude to the general public for the show of solidarity in solving crime.”