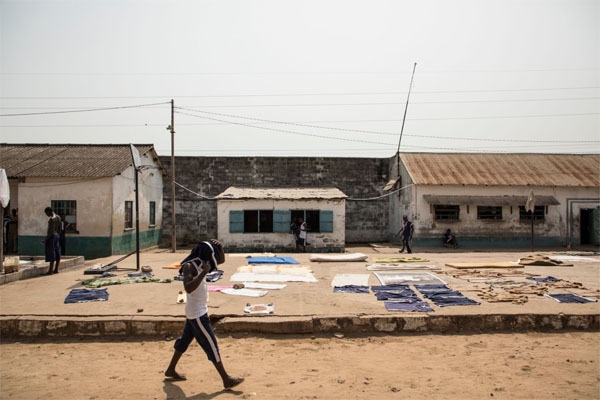 It was a hot Friday afternoon, bordering on 38 degrees Celsius when the taxi I was in, finally pulled to a stop. I disoriented to the loud yelling of a man in a language that felt foreign, but familiar at the same time. Stepping out of the car as my eyes adjusted to the light, my first introduction to the infamous Mile 2 was of an officer in a tower, with an AK-47 pointed in my direction with much disregard for safety or caution. He shouted furiously at the driver from his perch like this world existed only for people who come here to look up to him as he looked down on them. Who would have thought that the consequences of parking in the wrong spot could be a life lost? It finally dawned on me that perhaps the rumours of this place like all rumours were just a mixture of exaggerated truths and that I have stepped into a different world, a place with its own social norms.

Nerves and anxiety did a dance in me that felt like it lasted an eternity, but I had to remind myself to maintain my composure. The driver nudged me towards the main entrance heralding his return, as I regained the faculties of my legs and mind. While walking towards the gate, my eyes finally caught their sign that reminded everyone who passed which house this was. “STATE CENTRAL PRISON” printed in bold black letters on a sunburned peeling white painted wooden board. The building was indeed hard to miss, it was on the highway 3 miles from the capital that is usually under heavy traffic activity, be it for business or pleasure the city is always full of people passing through. Yet, very few offer a thought to the people locked up in the cells on the inside, or the conditions that they might be living in, probably too distracted by the sign opposite the prison advertising cold drinks by coca cola.

A junior officer directed me to a small office, run down and appearing old no doubt due to non-existent maintenance. The office had one window, just about the size of the opening of a small child’s crawl space. My eyes scanned over the unpainted walls that surrounded me like the insides of a cursed book, superstition, and unfounded prejudice, informing every page. There were two stools on opposite sides of the room for visitors and on one of them was a woman with a baby on her back her. Opposite her was a man who appeared deep in thought and was the cause of apparent amusement for the three officers who surrounded the desk beside him. I approached the officers with caution, as one of the two female officers started walking towards me, an air of authority about her telling me immediately that she in charge. She was a large busty woman who robbed me of sight of all things behind her, standing over me at a mere 5”8 but a towering presence over my petite 5”2 frame.

“What is the purpose of your visit?” she inquired as to my reason for being there. The irritation in her tone and the skepticism owning her eyes as she surveyed me from top to bottom but very apparent. I could tell she wanted me to know that my presence was unwanted. “I’m here to see Baboucarr Sey” I informed her, “he is in section B-12, I believe” I added. She looked at me with what could only be described as scorn, asked for my credentials then beckoned me to sit. After about 20 minutes  the woman in charge, instructed one of her colleagues to escort me to the main entrance where we met another officer wearing a different uniform, he also had the look that warned of the various rules that are played by here, as he pointed in a direction telling me where I would find the remand section.

On my way there, I observed several blocks of small buildings, one with men in uniform just finishing their prayers, another newly painted, the office of a senior officer I would guess. After all, in this country, all the best things were reserved for those in top ranks. The windows were bare and easy to see through. There I was in the middle of the main compound of the prison with only one tree in sight to cast any shade. It must have taken me about 3 minutes to get to the remand building but felt like an eternity.

There was nothing else on my way but more abandoned looking buildings and a tiny office I could have easily missed if not for a man I saw holding a book and talking to a prisoner. I thought he might have been a religious person, but he could have just as easily been a social worker since the prisoner looked somewhat distressed. The office had a sign that said pharmacy but with no medications, nurses or any medical professional in sight.

I finally arrived at my destination, a huge unpainted wall with a giant black gate. I was nervous and wondered what could have been behind the door, as I was lost in my thoughts, an officer aggressively opened the door to ask who I wanted to see. I mentioned the name of the prisoner and he asked me to get inside and have a seat. Again, another long stool with two other people already there waiting.

This building looked like it had just survived the aftermath of an unyielding fire, with the squatting homeless making the best out of a bad situation. There was only a single light bulb, dim and flickering due to poor wiring. The only other source of illumination was from the sunlight piercing through the tiny door that separated what looked like the communal area for those in remand.

The remand prison cells were the smallest rooms I have ever seen. There were about 6 cells with about 15 prisoners in each. Cramped! And no toilets. They were to use a bucket as I have been told by my friend that was in there. Authority allows two personas, the torturer and the tortured, the ones in power twisting people under their ward into joyless mannequins that fear and hate, and with the constant beating down of the people, it has trained them to accept and surrender to their predicament, inevitably submitting to learned helplessness.

This felt like purgatory, and purgatory was for the dead, not the living. After about 5 minutes of waiting, the prisoner finally came out and became physical proof that this place was indeed not for the living. I could only imagine what he was thinking about when he saw me since I was a stranger to him. He was a 6 ft 1 skinny, crippled man. From what I was told, he commanded some sort of respect in remand, disabled and all. Very aggressive and dangerous when he was a free man but calm and feared in remand. The transformation forced on him by this place essentially inflating all his negative traits, and trying to eliminate all his positive ones, while simultaneously robbing him of his humanity. To my surprise, I was not nervous around him or feared his presence like any rational person perhaps should have been. He felt quite familiar.

The prisoner wore dark brown trousers, unbuttoned checked dark blue shirt and looked like he hadn’t showered in some days. He was very respectable and received me well as if he was expecting me. I told him why I was there, he thanked me and took the provisions I bought for him. To be honest, I did not know exactly why I was there. The food provisions I brought were the basics they needed: sugar, Maggie cubes – to compensate for the horrible food, soap, tea bags, and powdered milk. These were the items a friend of mine who was recently in there told me were very valuable to them. The  taxi fare I paid to get there was more expensive than a month’s supply of these items. Something in me was drawn to going to Mile 2 and helping the helpless in any way I could, and this was the only thing I could have done. Or so I thought. Perhaps it was also sheer curiosity as to what it felt like to be in there.

Before I left he gave me a small paper with a number written on it, it was the number of a relative of one of the prisoners, he had apparently ran out of provisions and wanted his family to know. I asked him if there was anyone else in there that was in need as well, and he told me about a Senegalese who has been in there for months without charge and no family to bring him food. The look on his face was that of a man who lived in a world where altruism was debilitating more often than not.

A common consensus where Africa is concerned has a tendency of coming down to pity for its current state or a mixture of scornful dismissal and innocent ignorance of its accomplishments. I have always championed the fact that we are much more than those reductionist assumptions. However, stepping out of that place, I felt like I had lost that battle in an instant. I was never naive to think that humanity could ever unanimously see eye to eye on concepts like fairness or justice, but I was hoping for at least some semblance of an inter-subjective perspective on it. What I just witnessed was a perversion of ethics, regardless of logical the rhetoric. As I stepped outside and breathed in what felt like my first gasp of clean air for hours, I noticed that the skies had dark clouds that clung to its floors, mirroring my invisible anguish, mirroring debilitating faith in humanity.