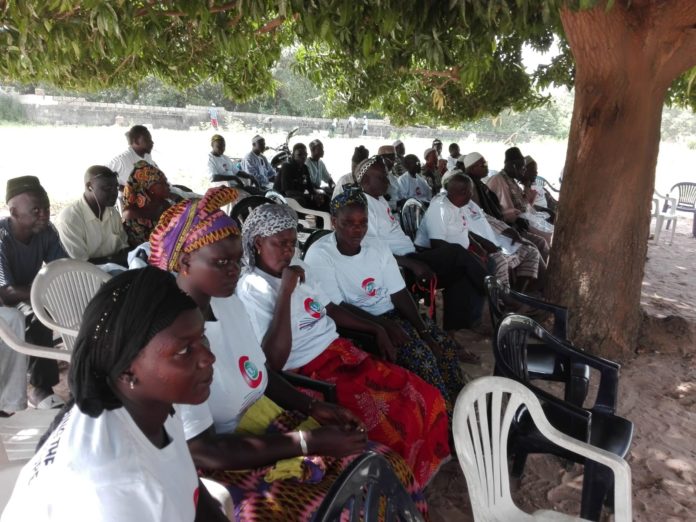 The Constitutional Review Commission (CRC) in partnership with National Council for Civic Education (NCCE) on Thursday 25th October 2018 started a civic education tour to prepare the regional communities and set the ground for the public consultations to follow. The first meetings were held in North Bank Region (NBR) settlements of Fass Njaga Choi, Essau, Pakau Njogu and Jurunku.

In his welcoming remark, Alhagie Wally Joof, Alkalo of Fass Njaga Choi expressed delight over the visit. He assured the tour delegates of his community’s readiness to participate in what he described as a ‘history making venture.’

Alhagie Sering Fye, the Chairman of National Council for Civic Education, said the purpose of the campaign is to inform communities on specific dates and venues the CRC will hold its public consultations. He added that the tour will ensure effective citizen participation in the constitutional review process.

“We want to see a constitution that would be people-centered. This process requires your participation and ideas in areas that are crucial to you as a community,” NCCE boss told the gathering in Fass Njaga Choi.

Speaking during the convergence, the CRC Civic Education officer, Saffiatou Savage-Sidibeh, said the Commission’s principal mandate is to review and analyze the 1997 constitution, draft a new constitution and a prepare a report to that effect. She pointed out that a constitution entails the fundamental laws of a country.

She said: “The participation of the communities is crucial in the constitution building process. CRC is obliged to consult you as a community and the content of the final draft of the constitution depends greatly on the feedback generated from you people.”

Mr. Ansumana Yabou, NCCE Civic Education Officer, told participants that their inclusion and participation is very crucial in drafting of the constitution process. He informed that the ‘Issues Document’ on circulation captured areas such as citizenship, fundamental rights and freedoms, legislature, judiciary, elections, among other sectors.

In a similar but separate development, the Constitutional Review Commission wishes to notify the general public that its direct public consultations originally scheduled to commence on Monday, 29thOctober, 2018, have now been postponed. The Commission will issue another press release in the coming week to advise precisely when the postponed public consultations will commence.