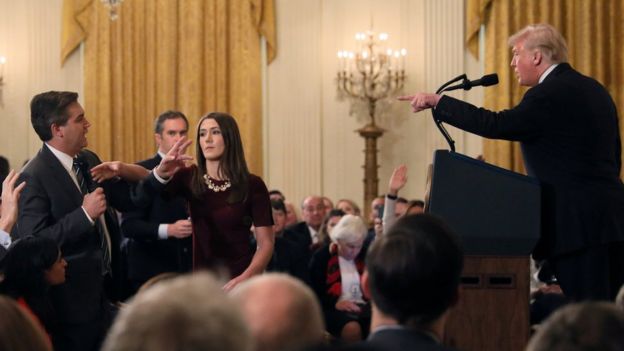 A judge in Washington DC has ordered the White House to return CNN reporter Jim Acosta’s press pass after it was revoked by the US Secret Service.

The judge’s order says that the pass must be reinstated as a CNN lawsuit against Donald Trump continues.

Mr Acosta’s press pass was taken after he clashed with the president during a news conference earlier this month.

The judge said the White House decision likely violated the journalist’s right to due process and freedom of speech.

Speaking outside the court, Mr Acosta praised the decision and told reporters “let’s go back to work”.

White House spokeswoman Sarah Sanders said they would comply with the order, and would “also further develop rules and processes to ensure fair and orderly press conferences in the future”.

“There must be decorum at the White House,” she added.

The ruling forces the White House press office to temporarily return Mr Acosta’s “hard pass”, the credential that allows reporters easy access to the White House and other presidential events.

Mr Acosta’s lawyer called the ruling “a great day for the first amendment and journalism”. (BBC)