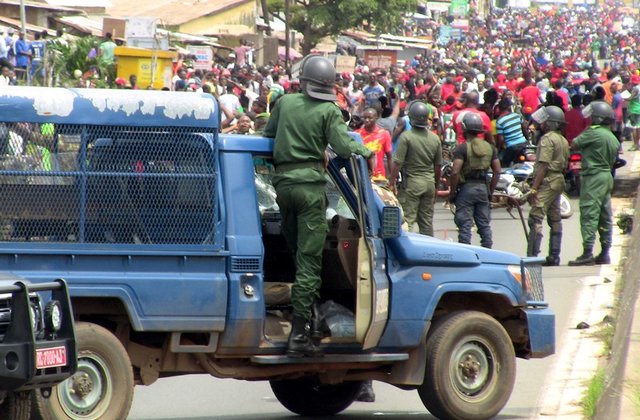 Thousands took to the streets of Guinea on Thursday in the largest of a series of protests over a suspected effort by President Alpha Conde to seek a third term that have led to the jailing of a dozen opposition campaigners and politicians.

Protesters chanted “Amoulanfe” – “It will not happen” in the local Susu language – and “Free the prisoners” on their way to the capital Conakry’s largest stadium.

The march was organized by the National Front for the Defence of the Constitution (FNDC), a coalition of politicians and activists opposed to a constitutional change that could let Conde seek a third term.

The peaceful, albeit heavily policed, protests were held in number of cities across the West African country.

Guinea, with a population of nearly 13 million, is Africa’s biggest bauxite producer and is host to international mining companies.

On Tuesday, twelve FNDC leaders were sentenced to up to a year in prison for organizing previous rallies in which nine people were killed. Last week, police opened fire on protesters as they ransacked military posts and blocked roads.

“We want him (Conde) to free the jailed leaders before any negotiation happens. Then Alpha needs to say he will not be a candidate,” Algassimou Diallo, who marched in Conakry wearing the rally’s official red color, told Reuters.

Eighty-one-year-old Conde, whose second and final five-year term expires next year, has refused to rule out running again and asked his government last month to look into drafting a new constitution.

His opponents fear that could be used as a reset button on his presidency, allowing him to run again like other African leaders who have amended or changed constitutions in recent years to stay in power.

Conde’s first election victory in 2010 raised hopes for democratic progress in Guinea after two years of military rule and nearly a quarter of a century under authoritarian President Lansana Conte, who died in 2008.

But his critics accuse him of cracking down on dissent and violently repressing protests – charges he denies.