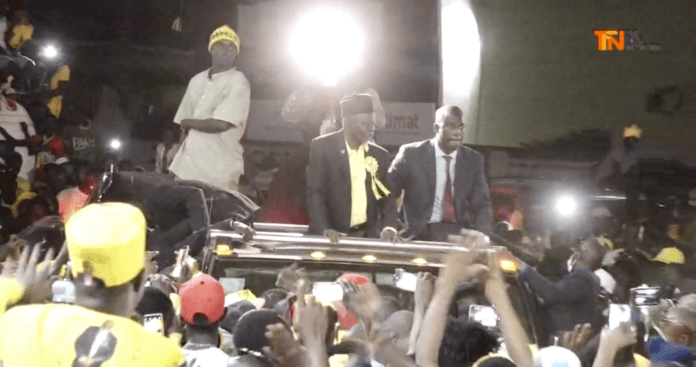 Darboe returned to the country on Tuesday from Europe where he has been touring for the past two months.

UDP adherents in their thousands travelled to the airport to receive the 71-year-old politician and accompany him home in what amounted to a tremendous show of love and support. It was also an elaborate show might.

Mr Darboe spoke to journalists as soon as his plane landed at about 4pm, branding his trip as ‘the best any political leader can have in his life.’

“[I] visited six countries, had fruitful engagement with party supporters and in the process of that engagement, some sympathizers and others who have heard a lot about UDP changed their allegiances and came to UDP,” Mr Darboe said.

A snail-pace journey from the airport to Mr Darboe’s house in Pipeline later followed, as cars struggled to wriggle their way through the crowd.

At his house in Pipeline, an emotional Darboe addressed supporters from the roof of his vehicle at about 10pm urging them to continue to ‘stand for The Gambia and for Gambians’.

“It is out duty as a party to ensure that all those who have suffered in one way or the other, their suffering does not go in vain.

“We want to establish a government, create a situation where the government will be at the mercy of the Gambian people,” Mr Darboe said.

We are Going to Protest against Racism and Police Brutality against Blacks in America!