I have been asked to speak on the topic The Gambian Writer and the Promotion of HumanRights. This is a profound topic and needs a detailed and careful exposition for it to be understood in its widest context, and properly. It will be prudent therefore to use the current situation in the country as a test case in the manner the writer contributes – or should contribute – to the promotion of Human Rights. Towards this end, I want to start by reading a poem I published on the Standard Newspaper in 2015.

When there is a puncture

In a nation’s social structure

While the police stand still

While the girl bleaches

Then the honest cheat

Who value only the beads

While the artist sketches

At the far end is the writer

Celebrate him – the writer!

We need to create a Gambian who is consciously aware of his duties and responsibilities to protect and defend human rights. This new Gambian will be, as the common parlance goes, ‘his brother’s keeper.’ If we do this, we will have a society which is developed, advanced, aware and just. After all these, we will have lasting peace and stability. For, peace, it is said, is not the absence of violence but the presence of justice. The writer is supposed to contribute immensely to the creation of that Gambian. Literature plays a very important role in shaping the cultural identity of a people.

To further highlight the fact that what we read and write has a direct impact (good or bad) on the politico-socioeconomic condition of the people of a nation, I would like to quote the renowned Kenyan writer Ngugi wa Thiongo. In his introduction to the English edition of the book entitled Matigari, he writes:

…. By January 1987, intelligence reports had it that peasants in Central Kenya were whispering and talking about a man called Matigari who was roaming the whole country making demands about truth and justice. There were orders for his immediate arrest, but the police discovered that Matigari was only a fictional character in a book of the same name. In February 1987, the police raided all the bookshops and seized every copy of the novel.

Matigari, the fictional hero, and the novel, his only habitation, have been effectively banned in Kenya…..

Who Is the Writer?

The writer is that person who uses language to teach, preach, and educate through entertainment. S/He brings out the ills of society and suggests ways to solve them. S/He is not aloof to the deprivation which his people face on a daily basis. S/He lives these problems and deprivations him/herself and suggests an inward solution to them.

Among the types of writers, the journalist’s work has a more immediate effect because it is direct and reports events of Human Rights provisions and protections – or their violations – as soon as they take place. Thus, informed of these, the general public agitates for them to be respected and addressed.

The other writers like columnists use their pen to bring to the public issues of concern. They talk about the protection of Human Rights and suggest ways to improve on existing laws and instruments to make them accessible to the people. Though this one is subtler in nature, its effect is more profound and more lasting. Take for instance the gender stereotyping which ends in the violations of the rights of women using religion. This is tackled in Michael Hamadi Secka’s book entitled ‘The Shock’.If people read these types of books, it exposes them to current trends and makes the stereotyping ugly and they end up abhorring those practices. This will make sure that they never entertain or indulge in such practices ever.

Again, I want to go back a little over a year ago when former president Yahya Jammeh refused to step down after being defeated in the December 1stPresidential Elections. Many writers came out to write and point out the potential danger of abuse and violations of Human Rights if he insisted on not stepping down.

Writers have always highlighted the ills in our society and through their pens sought to subtly change the culture for a better Gambia. Just look at the following excerpt from the poems of our own respected Juka Jabang.

‘Her life is full of beatings

She is battered all the time

(Juka Jabanag, The Repeal and other Poems…, as quoted in the Gendered Voices by Prof. Pierre Gomez and Isatou Ndow.)

This is how a writer portrays these abuses and violations of Human Rights, so the readers will abhor them from the core of their hearts. This is sometimes an earnest plea, sometimes a desperate cry, at other times commanding , on the mood of the writer and the audience. Whatever it is, the writer must always engage. Engage the government of the day and the governed so as to promote Human Rights. Engaging the citizens – the governed – will take the form of sensitization and educating the people to know their rights and the power to fight for them.

Finally, I want to leave you with a poem I wrote sometime last year which seeks to discourage a particular abuse of Human Rights.

WHAT IS MY NAME…?

Because I am black

They tell me to pack

Of possessions, I am naked, stack

My situation is such that I’ve no voice

In most matters of import, I’ve no choice

For any insignificant achievement, I rejoice

Oftentimes, I am harassed by different boys

I am discriminated at school

At home, many think I am a fool

The dream of having my swimming pool

Tradition says I should be married a teen

Having babies before the previous one I wean

They wish to my education n dreams throw in the bin

But, tell me, if that be my lot, how on earth will I ever win?

Some traditions, deprive me of my health

While Modou, Alieu go on to amass a lot of wealth

The culture, norms and traditions hide my beauty like a sheath

Here is my pledge: No marriage till I get education

Like John, Peter and Modou, I also have ambition, aspiration

From henceforth I’m taking in my hands, my desired emancipation!

So, the Human Rights – right to life, right to food, right to shelter, education, health, and the right to participate in the country’s political life, right to water and electricity, right to live a peaceful and happy life and so on are all featured in the works of Gambian writers.

Thank you very much for your kind attention! 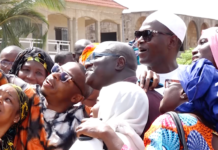 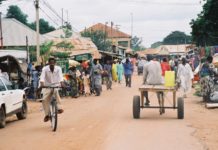 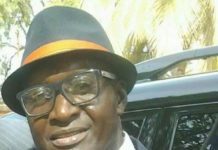