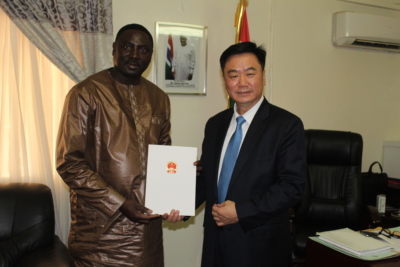 The Minister of Foreign Affairs, International Cooperation and Gambians Abroad, Dr Mamadou Tangara on Monday, 12th November 2018 received a copy of the Letter of Credence of the new Ambassador of the People’s Republic of China to The Gambia, H.E Ma Jianchun.

Ambassador Jianchun was accompanied to the Foreign Ministry by Zhai Yanping, Counsellor and Deputy Head of Mission, Embassy of the People’s Republic of China to The Gambia, Li Xiaoquan, First Secretary and Li Changhai, Third Secretary.

Foreign Minister Tangara welcomed the new Chinese Ambassador and extended the appreciation of the Gambian people to China. He recognised the laudable efforts of the former Chinese Ambassador, H.E Zang Jiming in rebuilding trust and confidence between the two countries, while assuring The Gambia Government’s recognition of the one-China Policy.

For his part, the new Chinese Ambassador H.E Ma Jianchun thanked Dr Tangara for the welcome. He said the Chinese Embassy in Banjul will continue to strengthen trust and cooperation between The Gambia and China. He assured Foreign Minister Tangara that China will work with The Gambia in order to implement the agreements at the Forum for China-Africa Cooperation summit held earlier this year in Beijing.

In a similar development, Foreign Minister Tangara also received a copy of the Letter of Credence of the new Cuban Ambassador to The Gambia, H.E Ruben Garcia Abelenda.

Dr Tangara welcomed H.E Ruben Garcia Abelenda to The Gambia while recalling Cuba’s remarkable role during the liberation struggle of African countries. He recognised Cuba’s contribution in The Gambia’s health sector with Cuban doctors going to the remotest places in the country to give health services to people.

H.E Ruben Garcia Abelenda thanked Dr Tangara for receiving him and promised to strengthen the historical bilateral relations between Cuba and The Gambia.