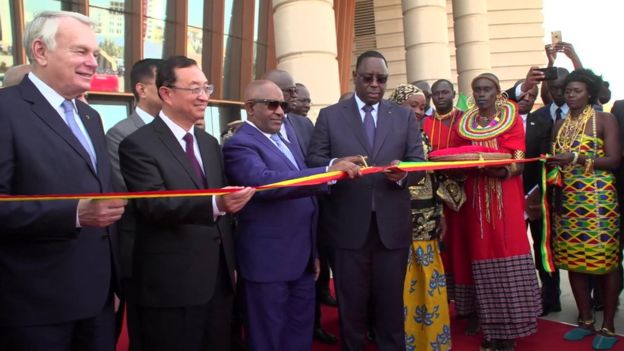 It follows calls from Senegal and other African nations for France to return art it looted during the colonial era.

Among the first temporary exhibitions to be shown is work from artists from Mali and Burkina Faso as well as from Cuba and Haiti.

After decades of inaction, construction was finally made possible after a $34m (£27m) Chinese investment.

The idea of establishing the museum dates back more than 50 years, to Senegal’s late poet-president, Léopold Sédar Senghor.

Along with Martinican writer Aimé Césaire, Senghor was a creative force behind the philosophy of Négritude, which opposed the imposition of French culture on colonies in Africa and the Caribbean.

The museum will not be a commemorative monument, its director says, but rather a creative laboratory to help shape a continent’s sense of identity.

It is expected to open to the public in the coming weeks.

“This museum is a step forward for us,” Amadou Moustapha Dieng, a Senegalese arts journalist, told the BBC.

“I know there are important relics which I’m not able to see unless I go abroad, but now [with] this space, we can get back the relics and Africans can come here now and see this was their history.”

The Museum of Black Civilisations has changed the landscape of downtown Dakar.

Built in a circular shape, the architecture was inspired by traditional homes typical to southern Senegal.

Senegal’s Culture Minister Abdou Latif Coulibaly told the BBC he welcomed the French report as “every piece from Senegal is in France”.

The museum’s bosses hope they will “be able to turn Senegal into an intellectual and cultural capital of the black world”.

For years, Dakar has been aiming to position itself as a cultural capital in the region. With President Macky Sall running for re-election in 2019, the government is hoping that the opening of the museum will help it achieve the goal.