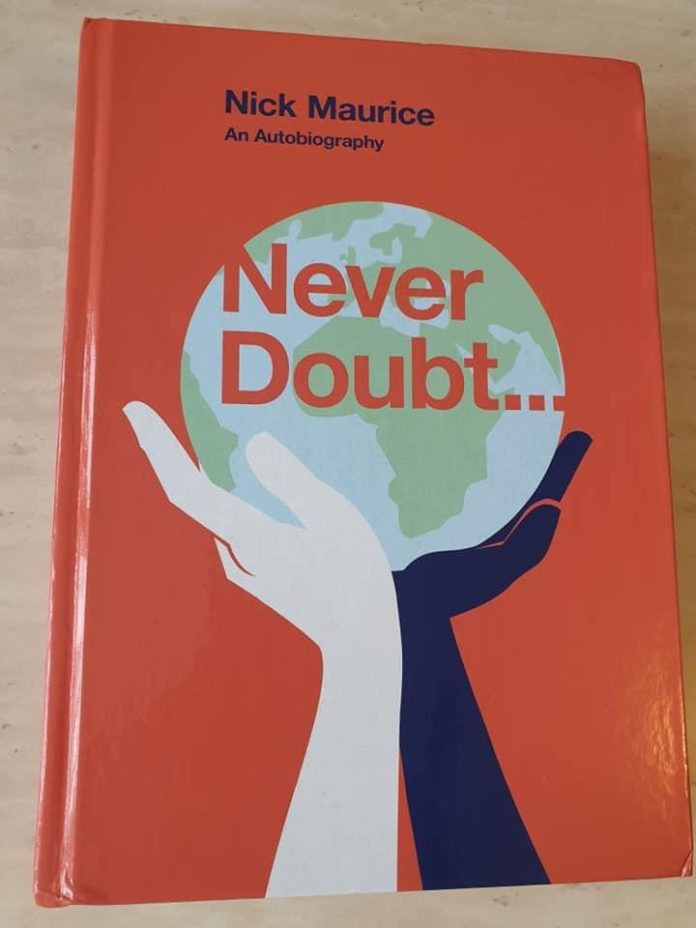 From the title of the book,’Never Doubt’…one might be forgiven for nurturing aspirations of living by its meaning.

But the experiences of the man who co-founded Gunjur-Marlborough link as narrated in his 432 page autobiography do not exactly bring the opposite of doubt to mind.

Born in the small town of Marlborough from a long line of doctors who made it to Guinness Book of records, the younger Nick Maurice made choices that would have filled lesser people with doubt and even question his sanity.

Through his work, he would go on to serve as director of Commonwealth organization Building International Links for Development(BUILD), getting awarded OBE by Her Majesty Queen Elizabeth and building close relationships with anti-apartheid heroes like Desmond Tutu and Joel Joffe who was part of defense team for Nelson Mandela at the Rivonia trial, among others.

But it’s not always been smooth-sailing for Nick Maurice. He was sent to boarding school at the age of 8 away from his parents with accompanying consequences.

Young Nick was a reluctant pupil and would hang onto the railings in his bid to avoid going to school. His fingers had to be pried loose to take him to school.

At the age of 14, he was victim of abuse that impacted his personal development. His Housemaster Billy Lamb who was engaged to a dame commenced touching him inappropriately to satisfy his desires.

The other students, he found out, were undergoing a similar experience. The behavior was reported to authorities. The perpetrator Mr. Lamb would shoot himself and his dog to death to avoid the rigors of justice. However, Nick looks back on the experience without any lingering bitterness.

“I can honestly say that I don’t think it had any measurable impact on me and would suggest that this was because firstly, I didn’t at the time appreciate that there was anything wrong in what was being done to me, after all he was my respected Housemaster…”,he wrote of the experience while wondering whether with all the publicity and feverish interest in such cases nowadays we should not ask the question about the possible impact of that publicity on the victims of abuse.

Though he felt compelled to follow in his father’s footsteps in medical practice, Nick’s academic record was by no means stellar. He failed three ‘A’ levels in Physics, Chemistry and Biology which he took at his father’s instruction. This disappointment would have put the kibosh on academic aspirations for lesser-willed people. But Nick moved on from failure to failure without losing enthusiasm which would eventually pay off.

At the age of 18, he would work for a year with Voluntary Service Overseas in Sokode in Togo. His services as an unqualified teacher were extremely valued by the community and he made lasting friendships. He stayed in the compound of a local chief whose generosity he was grateful for, but disapproved of his use of corporal punishment by caining his kids for infractions.

During his stint, he had an opportunity to meet the first president of Togo Christopher Olympio who was later assasinated. On 13 January 1963 Olympio was overthrown and killed in a coup d’état led by army non-commissioned officers dissatisfied with conditions following their discharge from the French army.

Upon return home, he would get into college and start medical training which he left with one year to go in order to work as a volunteer in Papua New Guinea.

Working in and from mount Hagen hospital in PNG in the Western Highlands where he helped the sick while accumulating hands-on medical experience is an experience he found fulfilling. He would make similar trips to Nepal through Britain Nepal Medical Trust,Cambodia and Calais.

His return to Marlborough in 1980 would coincide with the publication of the Brandt report ‘North-South-A Programme for Survival’, led by the charismatic former chancellor of West Germany.

The Brandt report sought to address the widening disparity in wealth between the so-called ‘rich North’ and ‘poor South’. This would lead to the birth of Gunjur Marlborough link in 1982 which involved exchange of people.

In almost forty years of friendship, hundreds of people have exchanged visits between the two communities with lasting impacts in key development areas like education, health and women’s empowerment, among others.

The mutual exchange of people has hit a substantial snag with difficulties of getting visas for young people from Gunjur due to changes in U.K. immigration law.

But Nick continues to work assiduously in collaborating with partners to enhance development in Gunjur.In his characteristic humility and Septuagenarian wisdom, he insists the collaboration with Gunjur is not entirely altruistic nor is it one-way, because both communities benefit from the link.

The autobiography ‘Never Doubt…’ makes for an interesting and inspiring read that oscillates wildly between haha funny to harrowing; with depiction of grim manifestations of human suffering and triumph all at once.

Sainey Darboe is a US-based Gambian journalist and former editor of The Standard.