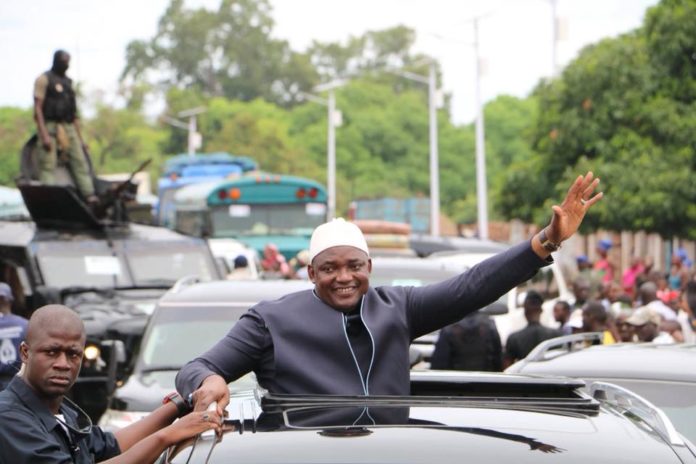 President Adama Barrow has promised the Mayors or Kanifing and Banjul that his government will do a massive roads, drainage and sewage construction exercise that will help the cities’ transformation and ease challenges to roll out their respective development plans.

The President said he has a got personal connection to the capital city giving that he has lived and work there both as a student and a businessman. Those experiences, he added, exposed him to the first hand environmental and infrastructural problems that Banjulians grapple with on daily basis. “The problems of Banjul can all be summed up into three: roads, drainage and sewage’’.

President Barrow revealed that the issue of Banjul has been always been his priority in terms of development: “In fact, when I assumed office, I wanted to bring an international real estate investor to lease out Banjul for a complete reconstruction of the city… But such a project will take time and planning. In the meantime, the Ministry of Works, through Gamworks, has already contracted projects for roads’ construction in Banjul’’.

While stating that he would ever remain grateful to the people of the city for making him the first Presidential opposition candidate to win there, the president assured the Lady Mayor that, being the first female mayor-elect in the history of Gambia, the government will stand by her in drives to realize her dreams for Banjul.

Mayors Rohey Malick Lowe and Talib Bensouda both decried the low standards of infrastructure they inherited as newly elected representatives, and managing them has overwhelmed their current capabilities. The two mayors had their turns to discuss these with President Barrow at the end of the countrywide tour that took him to remotest settlements in The Gambia and back.

“KMC has a half million population. We have entire Gambia residing in this municipality. We deserve to be the best city in this country. I am appealing that 90 per cent of all urban road contracts signed by President for the OIC Summit be constructed in this city,” Mayor Bensouda said at the Buffer one meeting to the President Barrow.

Mayor Lowe complained that a series of government agencies and ministries that are based in the capital do not honor their obligation of paying tax, and contribute no percentage of their revenues to the city’s development. Thus, she requested the president’s intervention in ameliorating the problem.

Minister for Works, Construction and Infrastructure, Bai Lamin Jobe assured the Mayor of Banjul of government support with roads, drainage and sewage. “Banjul receives 100, 000 visitors daily – excluding the Niumis and the Badibus. All of them produce garbage yet pay no taxes towards its management,” Minister Jobe said.

The Minister explained that the Banjul-Barra Bridge is a mega-continental project that was designed from the level of the African Union. It is meant to connect Banjul with other sub regional cities, open the continent for trade and expand commerce. Hence the Banjulians must take the project serious.