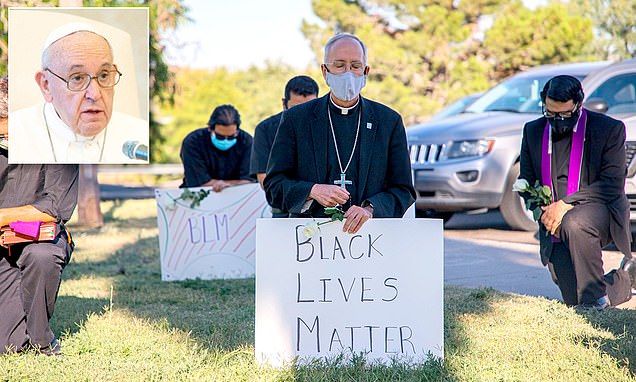 A bishop in Texas received a call of support from Pope Francis after he was pictured kneeling during Black Lives Matter protests that have swept across the country following the death of George Floyd and Breonna Taylor.

Catholic Bishop Mark Seitz, of the Diocese of El Paso, was joined by 12 other priests as they knelt in silence for 8 minutes and 46 seconds – the amount of time Officer Derek Chauvin stayed on Floyd’s neck.

The group had their eyes closed as they held signs that read ‘Black Lives Matter.’ They also had on masks and held white roses in their hands.

Others at the demonstration held signs that read ‘I want to breathe.’

Two days after the clergy’s demonstration, Seitz received a call after Mass that he was not expecting.

Pope Francis was soon expressing – in Spanish – how grateful he was for Seitz’s response, CNN reports.

‘Through me, he’s expressing his unity with everyone who is willing to step out and say this needs to change,’ Seitz said. (DailyMail)

Share
Facebook
Twitter
WhatsApp
Linkedin
Viber
Previous articleChina steps up its support to Gambia as agricultural supplies land in hands of agric ministry
Next articlePlaying hard to get is just as effective on men as it is on women, says new study