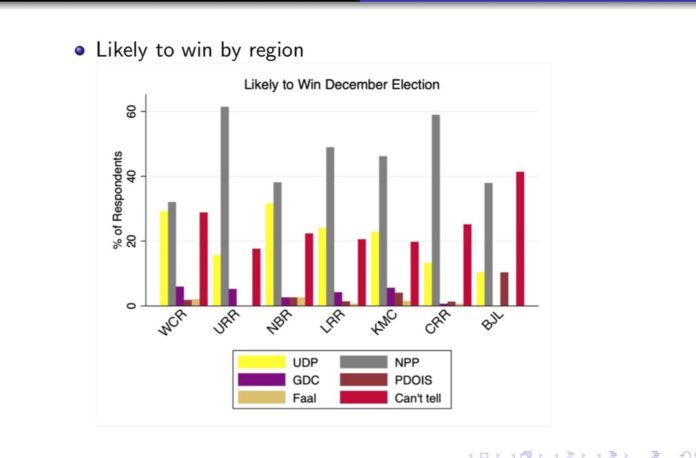 Barely one week to Gambia’s Presidential Election, a recent election survey, “The Gambia Pre-election Opinion Poll Survey 2021,” done by the Center for Policy, Research and Strategic Studies shows that incumbent President Adama Barrow will win the December 4 poll in all regions.

According to the survey, the proportion of respondents is high in Banjul, followed by West Coast Region (WCR) and Central River Region (CRR) and low in Upper River Region (URR). In all regions, it indicates that President Barrow’s National Peoples Party (NPP) wins the voting intentions of Gambians with the greatest performance in URR and CRR.

Statistically, 44% of respondents revealed that NPP will win the presidential election. 24% said Ousainou Darboe’s (UDP) will win. 5% of the respondents said Mama Kandeh’s Gambia Democratic Congress (GDC) will win while 2% goes to Halifa Sallah’s Peoples Democratic Organization for Independence and Socialism (PDOIS). 1% each goes to Abdoulei Jammeh’s National Unity Party (NUP) and independent candidate Essa Faal respectively. 24% of the respondents reported that they could not decide the winner of the said election.

Share
Facebook
Twitter
WhatsApp
Linkedin
Viber
Previous articleSacked GMC strongwoman Tida Kijera joins UDP
Next article‘No and definitely no’: Mai Fatty warns GMC will not rely on any party for survival as he announces his candidacy