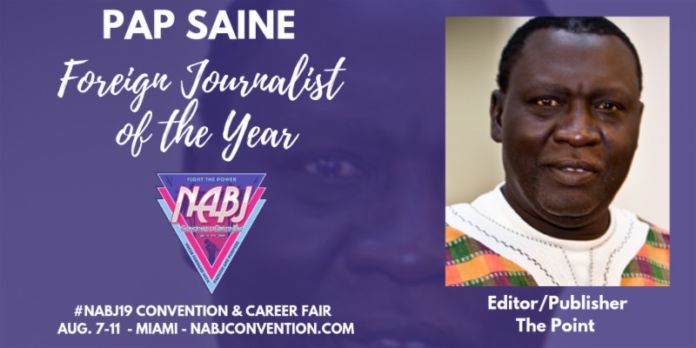 The National Association of Black Journalists (NABJ) has named Pap Saine, co-publisher and managing editor of The Point newspaper in The Gambia, West Africa, as the recipient of the 2019 Percy Qoboza Foreign Journalist of the Year Award.

The annual award honors the groundbreaking and often dangerous work done by foreign journalists covering the African Diaspora. The award is named for the late Percy Peter Tshidiso Qoboza, editor of The World newspaper in Soweto, South Africa. Qoboza’s powerful columns ranged from coverage of the 1976 Soweto riots to the tragic horror of apartheid and the white minority government’s treatment of millions of black Africans.

NABJ honored Saine at the Salute to Excellence Awards Gala, during the 2019 NABJ Convention & Career Fair on Saturday, Aug. 10, at the JW Marriott Miami Turnberry Resort & Spa in Aventura, Florida.

The Point is an English-language, independent newspaper that is recognized for holding the government accountable. Saine’s courageous reporting, commitment to press freedom and activism mirrors the tireless work and groundbreaking storytelling of Qoboza. Throughout his career, Saine has overcome harassment by government authorities in The Gambia, never swaying from his dedication to his cause.

According to the International Press Institute, which named him a World Press Freedom Hero in 2010, Saine has been arrested, criminally charged and imprisoned for simply doing his job as a reporter. In 2009, he was sentenced to two years in prison with five other journalists for using his platform to criticize then-Gambian President Yahyah Jammeh’s comments about press freedom and the unsolved murder of his colleague and The Point co-founder Deyda Hydara. While he was eventually pardoned, he continued to endure harassment from the government. Over the past year, he has spoken and written unapologetically about the role the former government leaders may have played in the death of his fellow newspaper colleague and the need for the government to strike down media laws that he describes as “draconian.”

According to NABJ President Sarah Glover, Saine’s commitment to journalism regardless of the attempts to silence his voice is exemplary.

“Press freedom is one of the most precious rights that we could ever fight for,” said NABJ President Sarah Glover. “I am proud that NABJ has the opportunity to honor Pap Saine as not only a champion for the citizens and members of the press of The Gambia but also a champion for ensuring that journalists worldwide can do their jobs without censorship or pressure from the government.”

and director of partnerships at the News Literacy Project, Saine has always been an individual that never hesitated to lead by example. Reyes explained that Saine garnered the nomination for the award, “Not just by producing high-quality journalism but by speaking truth to power and standing up to his government and holding them to account.”

Reyes added, “At great personal risk, he has kept working, not letting his voice be silenced even though he was imprisoned. And he has kept fighting to produce honest and independent journalism in The Gambia and throughout the region. As American journalists come under fire from all fronts, Pap’s example is one that should inspire us to persevere.”

In a recent interview with “All Africa,” Saine, who has also served as a Reuters correspondent for West Africa, underscored that there is still more work to be done in the fight for press freedom.

“To ensure democracy, government and the media (must be) partners…. there can be no democracy without a vibrant press,” he said.