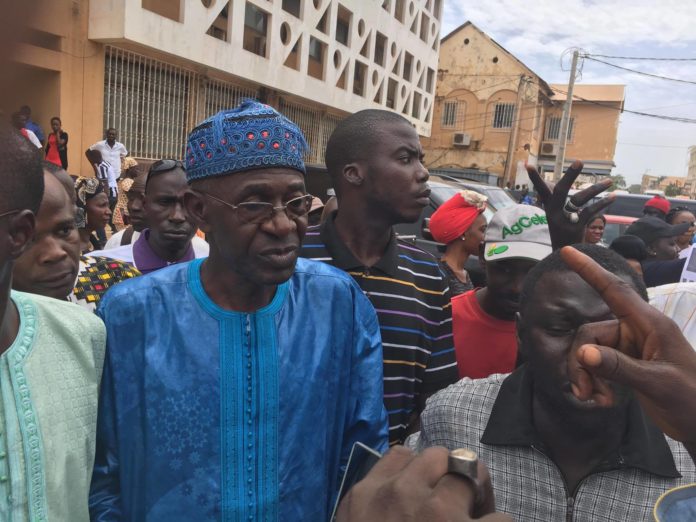 The caretaker leader of the opposition APRC Fabakary Tombong Jatta has said that former President Yahya Jammeh should have been in The Gambia by now as there is no reason why he should live in exile. “Jammeh’s achievements and positive impact on the lives of average Gambians are such that, I feel bad to know that he is not in this country,” FTJ said in a recent interview with The Standard .

He alleged that Jammeh had an agreement before leaving for Equatorial Guinea, which says he will be free to return to The Gambia any time he wants and his assets will not be tampered with but the current government flouted all that.

“Whatever people may accuse Jammeh of, he is a Gambian and as such, he should live in The Gambia, contribute and be consulted if need be as a former president, just like former President Jawara,” FTJ said.

When asked should Jammeh be granted an amnesty, like it was granted to Mugabe of Zimbabwe and JJ Rawlings of Ghana, Jatta said Jammeh should be given his dues so that when the current government goes out, it will equally receive the same. “It is important to reflect and put down emotions and sentiments and see what is best for the future of The Gambia,” FTJ added.

He further observed that when Jammeh was in power, he [Jatta] was a Majority Leader of the National Assembly and a bill was brought to parliament that gave immunity to former President Dawda Jawara.

The bill, he said, granted Jawara freedom, an office, salary of D50, 000, security and aides.

“Just imagine Mugabe ruled Zimbabwe for 37 years; a lot of atrocities happened and lot of people suffered. Mugabe even had problems with the new president who fled but when he returned, in the name of national reconciliation, he said let them put the past behind.

“The same thing happened in South Africa. Apartheid was the worst system of governance in the world but after all when Mandela came in, he pardoned and a truth and reconciliation commission was created, people confessed and now they are moving forward,” he said.

He said JJ Rawlings of Ghana allegedly killed a lot of people but Ghanaians decided to move forward and they are moving fast, adding that these are the leaves Gambians should borrow from.
“But what I observe in The Gambia is that, emotions and sentiments at times rule over us,” he said.

FTJ also said it is befitting for Gambians to turn a new page and move forward, adding that that some of the people accusing Jammeh today were part of his government and they also contributed in one way or the other in whatever they claimed to have happened.

“Since we cannot undo what has gone wrong, why don’t we forge ahead? Every system and individual can make mistakes, so therefore APRC has erred and the current government errs, and even the best of democracies have their weaknesses,” he said.
FTJ said when Jammeh was leaving, he [Jammeh]told him to give the current government a chance to do what they can for the Gambian people.