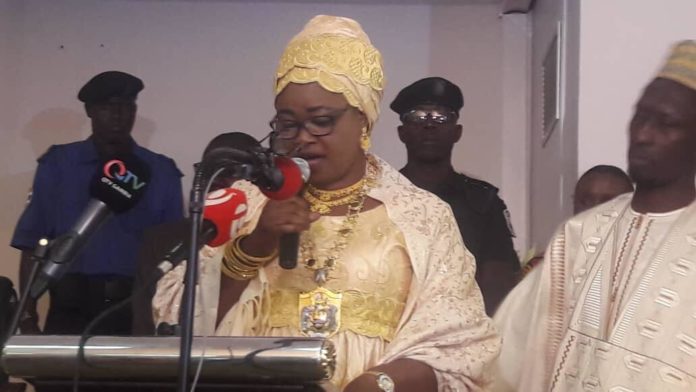 The newly elected Mayoress of Banjul City Council, Rohey Malick Lowe has stated that in as much as she was elected on the United Democratic Party (UDP) ticket, she will be the mayoress of the people of Banjul.

She added that, Banjul City Council (BCC) will never again be an extended wing of any political party instead it belongs to the people of Banjul irrespective of their political affiliation or ideology.

Rohey Malick Lowe was speaking on Tuesday during her swearing in ceremony together with nine (9) elected councillors in Banjul. The program was held at the Atlantic Hotel in Banjul.

She further said that during her campaign she declared emphasis in her manifesto that election to the office of Mayor is one of a social contract between the candidate and the people of Banjul. After taking a solemn oath, the newly sworn Mayoress assured Banjulians of her intention to contribute towards the advancement of Banjul.

According to her, such development agenda can only be achieved within the powers laid down in the Local Government Act 2002, noting that she would collaborate with central government to advocate for more autonomy and resources so as to perform effectively as a council.

“Our revenue collection needs to be revisited as we are currently in conflict as to who collects what,” while calling on the support of all the Banjulians particularly the aspirants

She finally said that historic event making her swearing in will make her start on a good footing by getting ready to develop the Banjul City Council together with the new dispensation where justice, peace and freedom prevails.