‘I THOUGH IT WAS A HOAX’: Faraba Inquiry Chairman Slams Barrow’s Proclamation 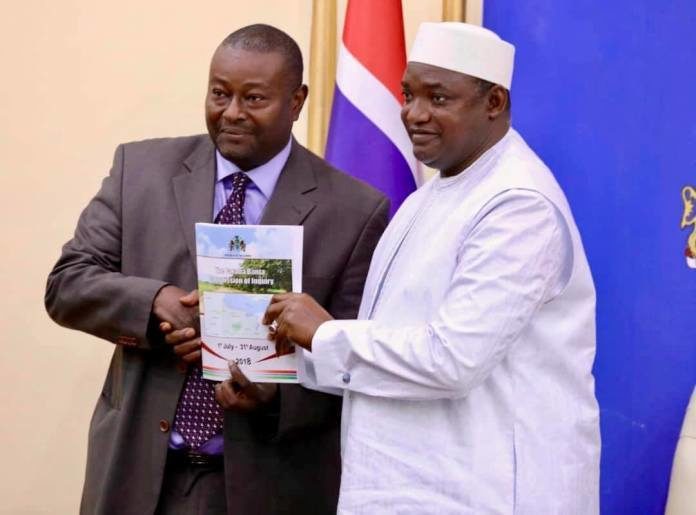 The chairman of the Faraba Banta Inquiry has said that he thought the press release issued by the Office of President with regard to the murder case of five police officers was a hoax.

“Like you, yesterday I saw a press release. I was equally surprised. In fact, I thought it was a hoax to start with because of the way and manner in which it was drafted. It was a bit funny. Because I know even if prosecutions are being withdrawn, there is a legal process which is followed through the Ministry of Justice. So I saw it, I don’t understand it to be honest with you,” Emmanuel Joof exclusively told The Fatu Network.

Faraba Banta last year made headlines following violent clashes that caused the death of three people. President Barrow visiting the community said he would set up a commission of inquiry into the June 18 incident whose recommendations he vowed to implement to the letter.

But on Tuesday, President Adama Barrow announced the scrapping of a murder case against five police others, a volte-face that caught many people by surprise. The statement from the Office of the President also announced that the civilians standing trial for their role(s) in the unfortunate Faraba Banta incident in June 2018 will be handed respite. The move has been receiving strong condemnation.

Mr Joof said: “I was the chairman of the Faraba Banta Commission. We were given a specific mandate and we delivered on time and we responded to the mandate, the questions that we were supposed to find. That came up in the form of a comprehensive report which we handed over to His Excellency. And of course thereafter the government came up with a white paper upholding the recommendations, they even went far.

“We are all in for reconciliation, I think we are all in to build a better Gambia but you cannot build a society based on impunity. We cannot build a society where rule of law is not followed. We all have to follow rule of law. There are processes, that’s why we have the judiciary. They are processes, there are procedures that we need to follow even in the process of reconciliation. So what I will tell you is that I just saw it. There was no legal ground for saying why those prosecutions were withdrawn.”