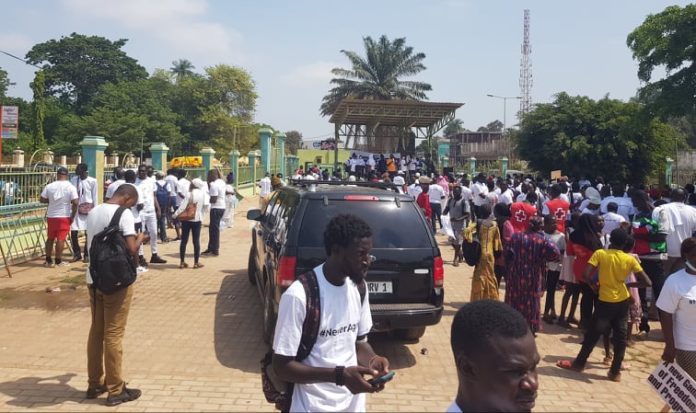 The Ministry of Justice has issued a statement reiterating the Gambia government’s commitment to the implementation of the TRRC recommendations.

Civil society members, victims as well as politicians on Saturday marched to call for the full implementation of the TRRC recommendations.

In a statement issued at the end of the march, government said it remains fully committted to the implementation of the recommendations of the TRRC.

A statement by the justice ministry said: “On the occasion of the #NEVERAGAIN March organised by the Victims Centre and TANGO, the Ministry reiterates its continuous support for all victims of human rights violations and its commitment to the course of the TRRC and Justice.

“The government of The Gambia in January 2017, under the leadership of President Adama Barrow, embarked on a Transitional Justice program aimed at, among other things, rebuilding Gambian society through reconciliation and the maintenance of peace, in accordance with the rule of law, justice, and accountability.

“Through the transitional justice program, the government established the Truth, Reconciliation & Reparations Commission (TRRC) after an unprecedented nationwide consultation and has fully resourced it with over GMD 200,000,000.00 (Two Hundred Million Dalasi) since its inception to date. Between the month of August 2021 and now, government has allocated an additional GMD13, 000, 000.00 to assist the TRRC complete its report.

“With regards to the victims of human rights violations, government in 2019 made an initial disbursement of GMD 50,000,000.00 (Fifty Million Dalasi) to the TRRC for initial payment of reparations to victims. Currently, the Ministry of Justice and the Victims Centre are jointly setting up a victims-led taskforce for the drafting of legislation to set up a Victims Compensation Fund to succeed the TRRC Reparations Committee. The government of The Gambia has already committed over GMD 150,000,000.00 (One Hundred and Fifty Million Dalasi) in the draft 2022 Budget Estimates, to be utilised as part of the reparations fund.

“The Ministry of Justice is also working with the UN and other multilateral and bilateral partners on securing additional funds for the post-TRRC activities which includes finding the best route to achieving justice for the victims.

“All the above and many other undertakings by the government are done in good faith and are sufficient demonstration of the commitment of this government to the principles and objectives of the TRRC. Therefore, comments about government’s lack of commitment to implement the recommendations of the TRRC upon submission of its report are at best premature and speculative.

“The office of the Attorney General and Minister of Justice wishes to assure all the victims, the Gambians, and partners alike that the government of The Gambia remains fully committed to the implementation of the recommendations of the TRRC in the best interest of the Gambian people without fear or favour.”

New York Fire: ‘Others Are Still Missing But Efforts Are Underway...