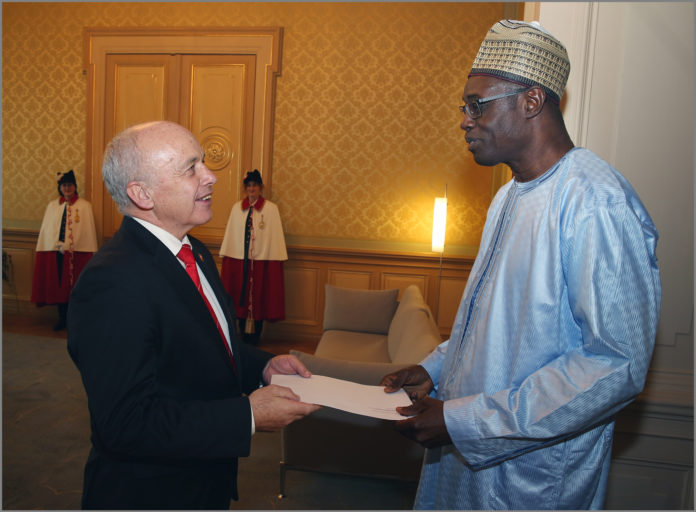 His Excellency, Yusupha Alieu Kah, Ambassador Extraordinary and Plenipotentiary of the Republic of The Gambia to Swiss Confederation and Permanent Representative of The Gambia to the United Nations Office, WTO and other International Organizations in Geneva, on 15th January 2019 presented his letter of credence to H.E Mr. Ueli Maurer, President of the Swiss Federal Council in Bern, Switzerland.

Ambassador Kah conveyed to President Maurer greetings and best wishes from President Adama Barrow and the People of The Gambia. He discussed issues of bi-lateral interest between the two countries as well as the broad objectives of The Gambia National Development Plan (NDP)

President Maurer in his remarks welcomed Ambassador Kah to Switzerland, and commended The Gambia’s impressive progress under President Barrow’s Administration and assured him of cooperation of the Swiss Government in advancing the common agenda of the two countries.

In other engagements whilst in Bern, Ambassador Kah met with the Head of the Sub-Saharan Africa Department and Senior Officials of the Swiss Federal Department of Foreign Affairs and Discussed ways and means of expanding and deepening the cooperation between the two countries.