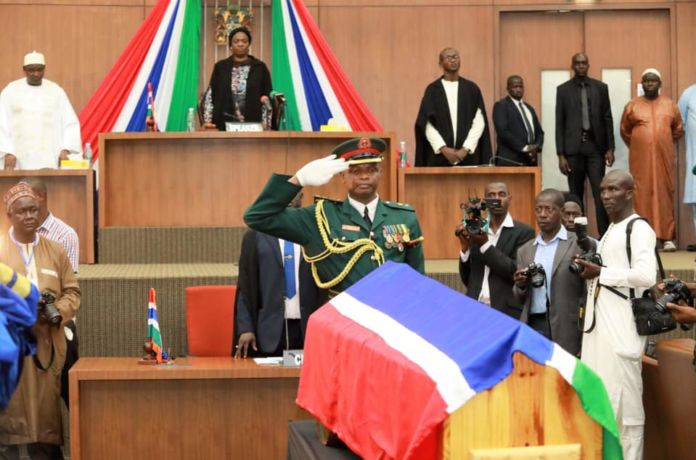 Gambians came together on Thursday to exalt Sir Dawda Kairaba Jawara for who he was; a patriot who served his country well.

Sir Dawda’s son eulogized him as ‘fair and even-handed,’ someone who went about resolving family disputes without taking sides.

“My father lived his life to serve as an example to those of us who remain and this has never been clearer to me than it is today,” Dawda Jawara Junior said.

“Everyone of our family saw a man that had got to where he was through sheer hardwork and discipline.

“Those close to Papa as we called him could not help but to learn that there are no shortcuts in life.

“That you should always act with integrity and honesty and always concern yourself with the welfare of others before selfish interests,” the younger Jawara added.

Former President Sir Dawda Kairaba Jawara died on Tuesday at his home in Fajara at the age of 95. His death has seen a whole nation club together to honour a man who led the vast and complex job of independence in 1965 and went on to be president for 24 years.

At his funeral on Thursday attended by Gambians from all walks of life including his two widows Chilel and Njaimeh, there was no shortage of encomium.

Veteran lawmaker Sidia Jatta was among a raft of speakers who paid homage to Sir Dawda describing him as ‘immortal.’

“Immortals are those who stamp the world with their stamp. Some would put it parabolically as leaving indelible footsteps on the sands of times. Those are the people who live their lives in the service of others, and if they are believers they live in the service of God. Sir Kairaba Jawara was an immortal,” Jatta said.

Omar Jallow, the man who served in Sir Dawda’s cabinet for 13 years as minister said the former president was the ‘greatest son’ of The Gambia.

“He championed the independence of this country and became our first prime minister. Gambian interest comes first and Sir Dawda played that role and he respected it,” Jallow added.

President Adama Barrow was last to speak at the event and in his speech described Sir Dawda as the father of the Gambian nation. He has however been slammed for delivering an ‘awful’ speech at the event.

Coach-Pasamba Jow who led the review said on Thursday: “President Adama Barrow was done a great disservice today by his speechwriter. They did a very lazy job of writing one of the most uninspiring speeches.”

Madi Jobarteh said: “It was such a poor unbefitting and irrelevant speech! Another missed opportunity for Barrow to turn around the country and resurrect himself! Sad.”

Salifu Dicko, on his part, said: “The script was absolutely distasteful; he could have turn it around & do justice in deliverance with a captivating vocal speech but it all fall apart; seedia was captivational.”

Saihou Saidily: “Yes he needs to reprimand his new Secretary General. That speech was awful, not befitting of one to be delivered at a State burial of a man of Jawara’s legacy.”

Sir Dawda was laid to rest at the National Assembly shortly after the funeral service ended on Thursday.