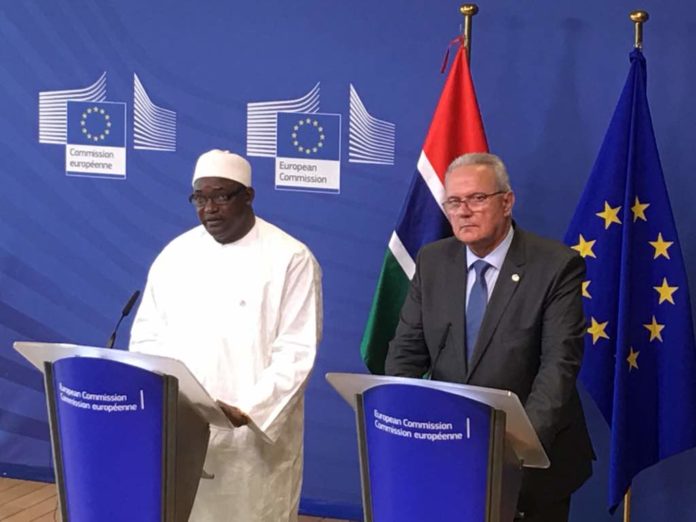 State House, Banjul, 24 May 2018 –President Adama Barrow has called on international investors to take advantage of the limitless business and investment opportunities in The Gambia, announcing that the country is ready for business.

Addressing an International Business Forum, as part of the ongoing International Conference for The Gambia in Brussels, the President said that his government has gone far in addressing the inherited financial and economic management challenges that eroded investor confidence and seriously limited private sector investment and foreign direct investment inflow into The Gambia.

The regulatory environment has been reviewed to further enhance the already favorable investment environment that exists in The Gambia. The Public Procurement Act, the Gambia Investment and Export Promotion Agency -GIEPA Act, and the Income and Value Added Tax have been amended.

‘The GIEPA Act and Investment Policy provide adequate investment guarantee to investors. The Gambia is a member of several multilateral organizations that protect and safeguard international investment, such as the Multilateral Investment Guarantee Agency and the International Centre for the Settlement of International Disputes.’’ said President Barrow.

The Gambia leader also informed the gathering that the financial management reforms being spearheaded by his government are paying dividend. He reported that interest rates have started going down, while lending to the private sector is significantly improving. The president attributed these developments to the steps being taken by government to reform the unfavourable laws and reduce some taxes to spur investment.

As an expression of political will, the presidency will assume the chairmanship of the eminent national forum.  The Trade Minister, Dr. Isatou Touray officially closed the Business Forum.

On the fringes of the International Business forum, President Barrow met with the President of the European Parliament, Antonio Tajani. They discussed, among other things, Agriculture with focus on value addition, mechanized rice irrigation and agro-processing. The aim is to create jobs for the youth as well as grow the economy.