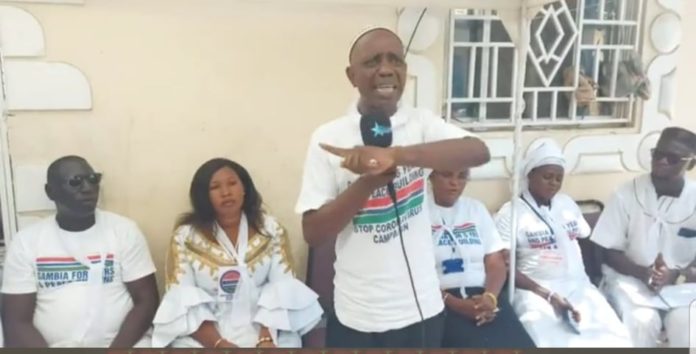 Gambia For Five Years and Peacebuilding said on Tuesday it will not let anyone to stoke conflict in The Gambia, including President Adama Barrow.

The pro-President Barrow group gave the warning in a meeting on Tuesday.

The group’s secretary general Ebrima Sorie Bah said: “We heard people coming out especially UDP accusing IEC of issuing documents to foreigners. I heard that it happened in North Bank. IEC is keeping mute and not talking. That can anger Gambians. There are revising courts and there can be many litigations that could injure the peace in the country.

“So Gambia For Five Years will not accept things like that and that’s why we said the IEC should come out and speak. No one should acquire a voter’s card illegally. IEC should also ask Rohey Malick Lowe to stop and that what she is doing is illegal. Roehy Malick Lowe held a press briefing saying no one will stop her. That she will continue what she is doing and anyone who doesn’t like it can go to court.

“So for us Gambia For Five Years will make sure IEC goes by the law. So IEC should be alert. We do not want conflict, we will not let anyone to bring fitna (conflict) here. Any party, any leader, anyone. Even President Adama Barrow if he wants to bring fitna here or wants to do something, this group will come out and say it’s not going to happen.”