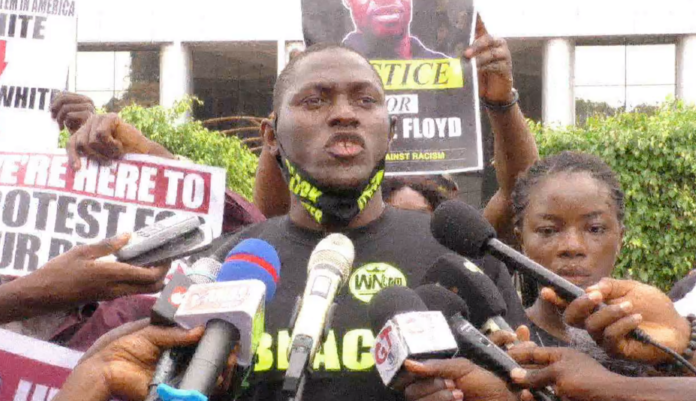 Gambians under the banner of Rising Against Racism group on Saturday protested outside the US Embassy in Banjul over the death of George Floyd.

Below is the official statement of Rising Against Racism read outside the US Embassy by Momodou King Colley.

I stand before you to read this statement with tears of sorrow. On 25 May, George Floyd – a black American man was brutally killed by a white American Minneapolis police officer. It is unconceivable that such a thing could happen in 2020

The way and manner in which Floyd was murdered is an act of provocation and contempt that has been going on in United States for centuries. Whenever we cried, we are laughed at and they give flimsy excuses, justification and counter arguments and the racism, discrimination and harassment continues.

Now, we are left with no option but to stand at their level even if it would be the end of world civilisation, but we are determined to fight. We have no tears left.

I don´t have to get into the story of how The United States has become their country. In fact, it does not matter where a person comes from and the pigmentation of his skin. Racism and discrimination in all forms is unacceptable.

In essence, we are not here to appeal to the United States to respect and protect the rights of blacks, but we are demanding it. Otherwise, the United States government should ask themselves whether they want to live in isolation. We cannot and will not allow their Embassies to operate in our various countries while they continue to treat black people with complete disregard and contempt.

Therefore, we are calling on the United States government to make sure Justice takes place in the case of George Floyd, Lamin Sisay and others. And to act on what they preach.