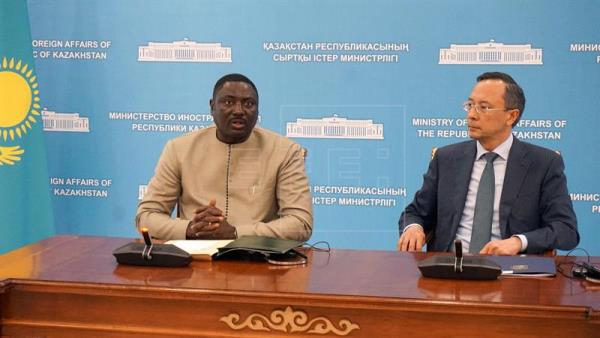 The Honourable Minister of Foreign Affairs, International Cooperation and Gambians Abroad of the Republic of The Gambia, Dr Mamadou Tangara Wednesday 19thSeptember 2018, paid an official visit to Kazakhstan.

In his official maiden visit to Astana, Dr Tangara met the Foreign Minister of the Republic of Kazakhstan Kairat Abdrakhmanov.

The two ministers of foreign affairs discussed the forthcoming summit of the Organization of Islamic Cooperation, which will be held in The Gambia next year.

Dr Tangara told Foreign Minister Kairat that The Gambia plans to adopt the experience of Astana in holding similar forums which hosted the event last year.

“Kazakhstan’s experience in building dialogue is interesting for us, interethnic and interfaith dialogue is important for us, we all must maintain fraternal relations and strive for dialogue,” Dr Tangara said.

While emphasising the importance of what unites people and not what divides them, Honourable Tangara applauded Kazakhstan’s relations with its neighbors.

“Kazakhstan has powerful neighbors and has peaceful relations with them. We have much to learn from you. I would like Kazakhstan to be more active in Africa,” he added.

For his part, Foreign Minister Kairatthanked The Gambia for supporting the Central Asian country’s UN Security Council candidacy and for all the peace initiatives in Astana.

“Seventy percent of the agenda of the UN Security Council is occupied with issues of peace and security on the African continent,” the Kazakh foreign minister said.

Abdrakhmanov also said Gambia would play a key role at the OIC next year.

“During our talks, we discussed important events, such as the Meeting of Foreign Ministers of the OIC and the organization’s summit. Kazakhstan will help Gambia in preparing these important events,” he said.

During the meeting, the foreign ministers also discussed measures to encourage and support interethnic dialogue, which will be the main theme of the next Congress of Leaders of World and Traditional Religions to be held Oct. 9-10 in Astana.