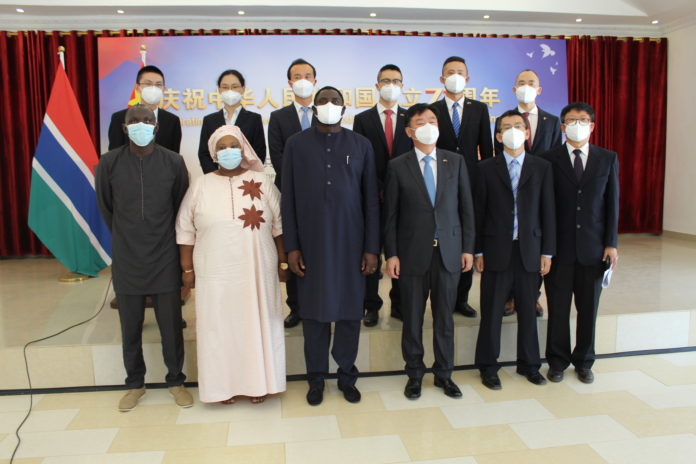 The Honourable Minister of Foreign Affairs, Dr. Mamadou Tangara, has reassured the Government of the People’s Republic of China through its Embassy in Banjul that the Government of The Gambia would always support the promotion of multilateralism, win – win cooperation,  the belt and road initiative and the development framework defined by the Forum on China – Africa Cooperation (FOCAC).

“Likewise, we will also continue to stand firm with the people of China, in respect to the one China principle,” Foreign Minister Tangara posited. He made these remarks on the occasion of the 71st National Day Anniversary celebration held on the 29th September 2020 at the Embassy of the People’s Republic of China in Bijilo. The ceremony took the form of a mini virtual function.

He adds “as we continue on the path towards our National Development Plan objectives, we trust in your cooperation at all times. Moreover, we continue to welcome investments, tourists, and professionals from China in the same manner we pursue the actualisation of the dictates of our bilateral agreements. Together we are stronger, and together we can make the world a better place.”

Minister Tangara said The Gambia salutes China for charting the way forward on cooperation in the post-pandemic era as illustrated by the outcome of the successful, extraordinary China and Africa Summit on Solidarity against COVID-19 held in June 2020. He said with concerted efforts, Gambia, China and the world will defeat challenges faced.

He indicated that China has invested and continues to invest heavily in the future of Africa adding that numerous Chinese companies are working in many sectors of The Gambian economy to uplift infrastructure as demonstrated by the construction of the International Conference Centre and roads and bridges project in URR.

This, he said, enhanced food security, boosted healthcare delivery and agriculture, expanded trade and built human capital development through both internal training as well as training of Gambians in various Chinese universities.

He said 2020 has been an eventful year by all accounts due to the fact that COVID-19 pandemic has tested global health systems, caused regrettable loss of lives, reversed the economic gains built over many decades, compromised peace, security and social cohesion in many communities.

“This will improve trade activities, increase employment opportunities, increase self-reliance, and allow Gambians to reach out to international markets,” he revealed.

Speaking at the occasion, the Ambassador of the People’s Republic of China, H.E. Ma Jianchun, recalled that 42 years of the past 71 years has been years of reform and opening – up. He said the Chinese people under the leadership of the Communist Party of China built socialism with Chinese characteristics.

Ambassador Ma said “once an impoverished country, China now emerges as the world’s second largest economy, contributing to over 30 percent to global GDP growth for over 10 consecutive years.”

He said there has been remarkable innovation and achievement in building new infrastructure such as 5G, industrial internet and artificial intelligence plays a leading role positioned in some fields.

Ambassador Ma indicated that the Chinese government has always been devoted to the improvement of people’s livelihoods while striving for high quality growth. He said China has set up the largest social security network for the largest population in the world. The Chinese people’s average life expectancy has doubled from 35 to 77.3 years.

“We have lifted 850 million people out of poverty over the past 40 years. By the end of this year, we will lift all rural populations living under the current poverty line out of poverty. That is to say we will completely wipe out poverty and complete the building of a moderately prosperous society,” he added.

The Chinese Ambassador recalled that since the Covid – 19 pandemic started, China has always acted with openness, transparency and responsibility and actively fulfilled its international obligations. He said his country shared technical documents on treatment protocols and containment strategies with a total of 180 countries and over 10 international and regional organisations.

The Hon. Minister of Foreign Affairs was accompanied to the occasion by the Director of Asia and Oceanic Affairs Division, Ms. Fatou Njie – Hydara.