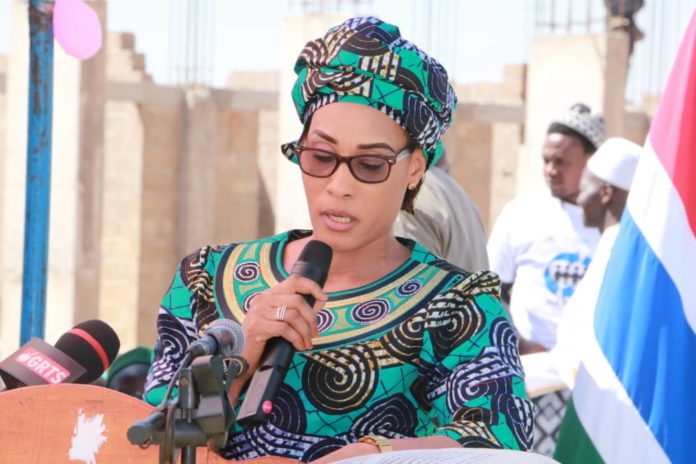 Her Excellency, First Lady Fatoumatta Bah-Barrow on Wednesday 30th January, 2019, presided over the launching of Nsaa Keno: Nutrition and Protection for Children on the Move project at Jarra Soma, Lower River Region.

The project seeks to strengthen regional and local government structures, provide an opportunity for all people to understand the rights of children, and the need for their protection. Additionally, it is designed to provide adequate nutrition to maximize the potential of children in the country.

In her statement, the First lady described the launching as opportunity for government and stakeholders to fulfill their commitment to upholding Children’s rights. She said in her new role as a champion of the Children on the Move initiative, she would continue advocating for the implementation of enacted legislation and policies that protects the rights of children.

‘’I will continue working with Civil Society Organizations and the UN system in The Gambia to reach out to communities and families in a bid to increase awareness on how to ensure and maintain the best interest of the child at all times’’, she stressed.

First lady Barrow commended the Italian government, through its Ambassador, and the UN system in The Gambia, particularly UNICEF and UNDP, for supporting such a project.For her part, the Governor of Lower River Region, Fatou Jammeh Touray said the Nsa Kenno project will provide better social services to the taxpayers and make decentralization a smooth process.

The UN Resident Coordinator, Seraphine Wakana highlighted the leading role UN plays in pushing the agenda of the government, particularly the National Development Plan, while stating that the project is aimed at reducing malnutrition among children and discouraging migration through creating opportunities. The Italian Ambassador to Senegal, Francesco Paalo Vanier said children issues are as important to Italy as it is to Gambia. He said the fight against child malnutrition is breaking away from poverty.

The event was punctuated by cultural performances by women group in the Soma.