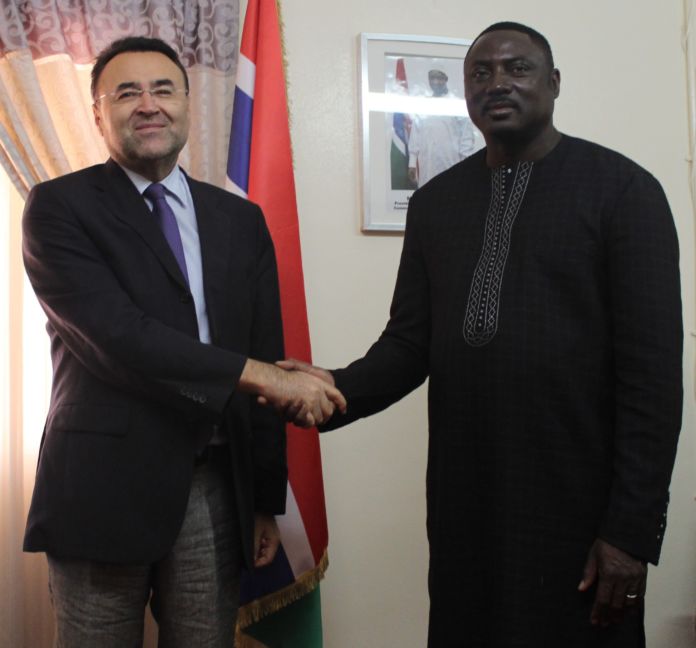 Ismail Sefa Yuceer on Tuesday met with foreign minister Mamadou Tangara, after his tenure as Turkey’s top diplomat in the country came to an end.

Yuceer was Turkey’s ambassador to The Gambia for the past three years following his appointment in 2016.

The humble diplomat met with foreign minister Dr Mamadou Tangara on Tuesday, for the last time as ambassador to The Gambia.

Foreign affairs said in a statement: “The Honourable Minister of Foreign Affairs, International Cooperation and Gambians Abroad, Dr. Mamadou Tangara, on Tuesday December 3rd received the out-going Ambassador of the Republic of Turkey, His Excellency Mr. Ismail Sefa Yuceer, in his office in Banjul and they had a kind and friendly talk with each other.

“Ambassador Sefa Yuceer was in the Minister’s to bid him farewell. In his statement, he paid tribute to Gambians whose character, resilience and peaceful nature made the 2016 change to democratic system of governance possible. He lauded the good relations that exist between the two countries and promised to continue to support The Gambia. He was confident that his successor will take the relationship to higher heights.

“Minister Tangara said that the friendly relations and cooperation between The Gambia and Turkey developed satisfactorily in recent years under the guidance of the principles of mutual respect, mutual trust, mutual benefit and win-win. He believed that the relations of the two countries would further develop with the joint efforts of the two sides. He also commended the President of Turkey and the Turkish government for the cooperation between the two countries.”