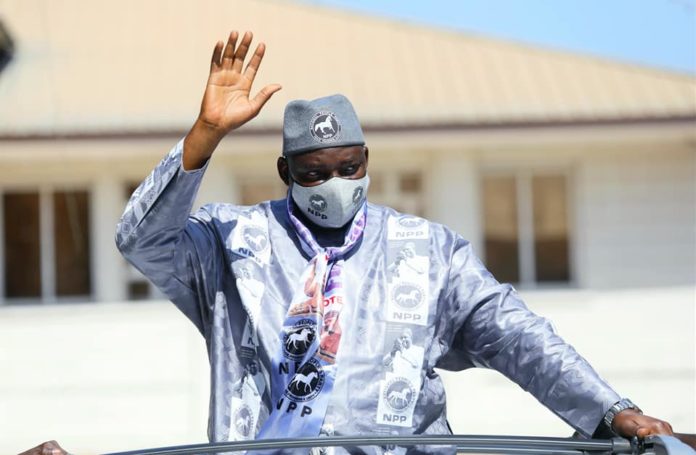 His Excellency President Adama Barrow, Secretary General and Leader of the National People’s Party (NPP received thunderous and tumultuous welcome in Central River Region (CRR) North as his Presidential re-election campaign progresses through the third and four day of the nationwide interface with voters.

Satisfied residents of these previously-neglected communities described President Barrow as a man of his words who fulfilled his promises to them with the life-changing regional roads project.

Several speakers underscored the President’s city state policy as possibility citing key infrastructure such as roads, water, electricity and health care that will continue to be provide by an NPP-led government.

With the unprecedented turnout in CRR North, the region sends an emphatic message that come 4th December 2021, President Barrow will win the region with an overwhelming majority.

The elated President, in all the constituencies of CRR North assured of his commitment to building a strong and vibrant democracy post December 2021 that will stand the test of time.

He commended the people of CRR North for the rousing welcome and urged Gambians to vote for the NPP led-Alliance that will continue to promote National Reconciliation, National Security, Peace and Tolerance as opposed to oppression, anti democracy and divisive party that had no agenda for Gambians beside revenge, insults and intimidation.

President Adama Barrow who is confident of a landslide victory invites all Gambians to his December 5th Presidential election victory celebration.

The President is expected to return to the Kombos on Sunday 21st November 2021 where over two hundred thousand Gambians are expected to receive him in Kalagi and Abuko bridges as thousands others line up the streets.

Gambians will go to the pools on 4th December, 2021 and President Adman Barrow observers say is expected to be re-elected with an overwhelming majority credited to his unprecedented development over the last five years and democratic nature.