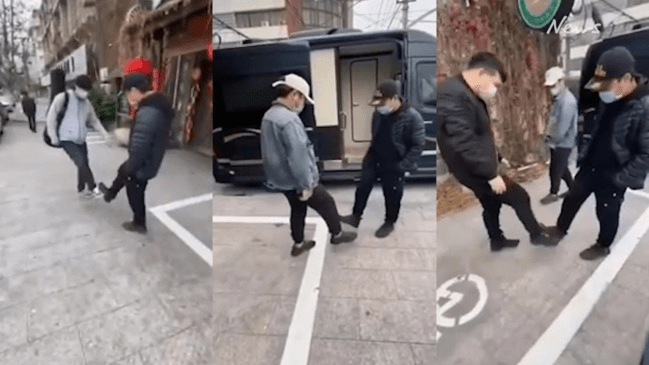 People in China have abandoned traditional handshakes and started to greet each other by tapping their feet together to avoid the spread of the novel coronavirus.

Trending videos show residents of the country using their shoes to touch others’ shoes as they meet during the health crisis.

The new form of social greeting has been billed as the ‘foot-touching curtsy’ on Weibo, the Chinese equivalent to Twitter.

One trending video, which was posted by a Weibo account based in Ningbo, shows one man wearing a face mask coming out of a vehicle to meet several people.

But when one of his guests extended his hand for a handshake, he gestured him to stop.

Another clip on short-video site Douyin, thought to be filmed in Shenzhen, captured a similar scene when five men gathered to drink tea after an extended Lunar New Year holiday.

China’s social media users have been amused by the unconventional curtsy.

On Weibo, one person joke: ‘Now you need a pair of good quality shoes.’

Another one praised: ‘These people are so creative!’

A third person wondered: ‘Are we all going to greet each other like this from now on?’

But a fourth commenter worried: ‘What if the virus gets passed through the soles?’

Chinese people are not the only ones who have adopted the foot-to-foot way of greeting.

In Iran, a country with the second highest number of coronavirus deaths, a viral video shows people using the innovative approach of greeting to prevent the contagion.

The hashtag StopShakingHands has been widely used on Twitter as the outbreak takes hold and Britons take steps to minimise the chances of catching the illness.

One British doctor today also claimed she has stopped shaking hands with new acquaintances and a Google executive revealed how he has spent hours avoiding the greeting to stop the virus spreading. (DailyMail)