Barrow Shoots Himself in the Foot 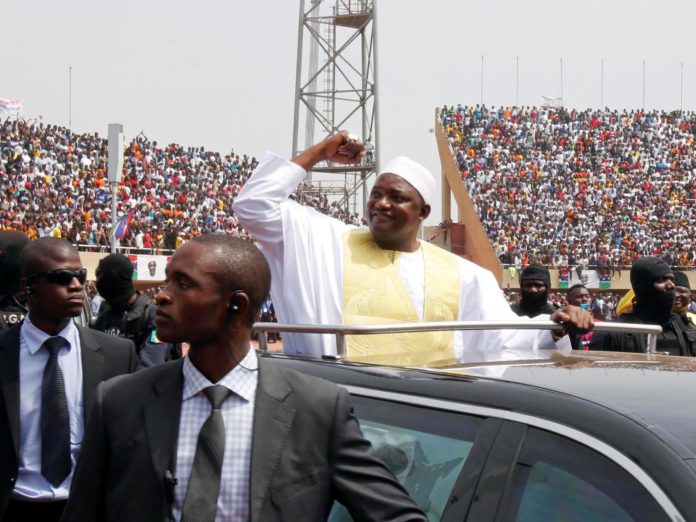 In the presidential elections of 2016, Gambians were presented with a Hobson’s choice: return an erratic dictator to power or hand the presidency to an inestimably inexperienced candidate.

Gambians were never in doubt about Barrow, the man they were going to entrust with the custodianship of their national affairs. He was a complete greenhorn in statecraft. He knew nothing about governance, about government, this sprawling industry of institutions and personalities and policies and ideas.

Getting rid of Jammeh was key to the Gambian voters. It offered them a much-needed springboard for a fresh start, a new direction. Jammeh had to go. The country had to be pulled back from the looming possibilities of societal disintegration. But the voters were also hopeful that his replacement, though woefully ill-equipped, would do better at some point in the long-run.

How? First, by surrounding himself with the right people, the people with the ideas on the knots and bolts of governance. And second, by the gradual process of self-inculcation, learning on the job, immersing himself in the conceptual and deliberative processes of decision-making, understanding policies and messaging, presentational and aspirational leadership.

Gambian voters didn’t expect Barrow to be proficient in his job as soon as he entered the State House. But they expected him, and time permitting, to master, at least, the rudiments of leadership, and in consonance with the aspirations of the people who voted for a change.

But like a man caught in a quicksand, Barrow is either stuck or drowning. He has been unable to impress with any new-found skills. It’s not even the fact that he has been snail-slow in the leadership-learning process. It’s the fact that he hasn’t learned anything at all. There are many factors to account for that, but his failure to thrive is mainly because he has had advisers who don’t know anymore than he does. It’s the blind leading the blind.

Consider Barrow’s recent proclamation that he would stop political rallies if he won the forthcoming elections in December. No leader who had been well-served by his advisers and who understood the basics of electioneering, would reveal such a hostile mindset, and certainly not in an election year.

Barrow, in barricading himself and in a desperate attempt to mollify our fears over his recent faux pas, can’t do himself any good by hiding behind the recent press release of his spokesman or by expecting us to accept the famous quip that leaders should never be judged by what they say but rather by what they do. This is no waiting game.

This is a matter of immediacy. A leader threatening to end political campaigns —- the lifeblood of any democracy —- shouldn’t be ignored. He should be put under the microscope. All the way to Election Day. Gambian voters shouldn’t wait until Barrow acted on his threat before they took him seriously. They should. Now.

Banning political errands or speech is the legerdemain of dictators or leaders hankering after power, the concentration of its allocation and the pervasiveness of its reach. It is dictators like Saddam or Jammeh or Hoxha who show such perniciousness. Leaders, like Barrow, whose ascendancy arose out of the crucible of democracy, and who, in particular, defeated one of Africa’s last hold-outs of dictators, ought to know better. They are expected to be staunch allies of democracy, promoting and strengthening the ideals of free speech and association, the rule of law and citizen-sovereignty.

But Barrow has gone off-tangent. This is the first time he has shown flickers of arrogance of power. This is out of character. Until now, Barrow had carried himself well. He hadn’t cared publicly about the acerbic criticism, ridicule even, some in the citizenry had been throwing his way. He knew how to tune it out. He didn’t howl back. He didn’t arrest or detain journalists or opposition leaders. He just kept to himself, taking the vitriol on the chin and moving on and confounding his critics with his reticence.

Going into the elections later this year, Barrow’s strongest suit has been his tolerance for dissent. The Gambia is enjoying an unprecedented level of freedom of speech. Barrow isn’t the provider of this freedom. This was earned. But in Barrow, a man known for his humility and not easily thrown into irritability, The Gambia’s new-found and healthy expressiveness has found the right ally.

No longer? By his recent pronouncement, and which was, by no means, an unforced error in political speechifying (he was both blunt and precise), Barrow has begun squandering away his most substantial political capital. And on this issue, he has both shaken the confidence the people had in him and gifted the opposition a strong talking point going into the elections.

Should he lose in December, Barrow should look back on his recent speech as the catalyst for his political demise. We will find out in the coming months.

About the author: Cherno Baba Jallow is a native of Basse and currently lives in New York City. You can personally write to him at: [email protected]