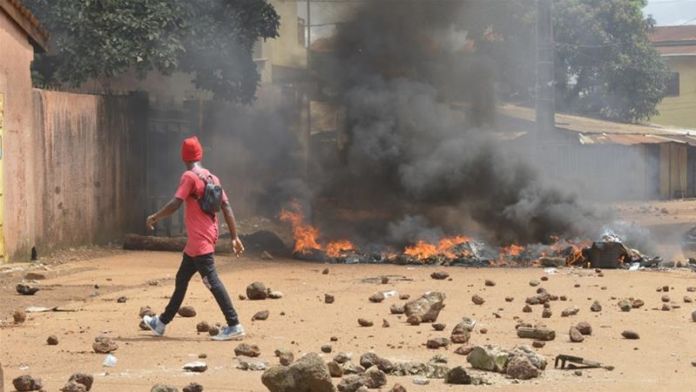 At least five people have been killed in Guinea during demonstrations called to oppose a possible change to the constitution that could allow President Alpha Conde to run for a third term.

Police opened fire in clashes with demonstrators in the capital, Conakry as protests in the city of Mamou, an opposition stronghold east of the capital, also turned violent on Monday.

At least four protesters were shot dead in Conakry, according to the Guinean Organisation for the Defense of Human Rights (OGDH).

Government spokesman Damantang Albert Camara said a gendarme in Mamouone and protester in Conakry had been shot dead.

“The goal of the demonstration, which was meant to be insurrectional, was clearly to provoke a violent response from the military to cause a lot of deaths in order to inflame the situation,” Camara said.

Opposition leader Cellou Diallo, who came second behind Conde in the 2010 and 2015 presidential elections, told reporters that four protesters had been shot dead in Conakry. He said that at least 38 people had been wounded in Conakry and Mamou.

“We encourage citizens to continue to demonstrate – today, tomorrow, the day after tomorrow – until our legitimate demands are satisfied,” he said. “We need a clear, firm and irrevocable declaration from Alpha Conde renouncing a third term.”

In a statement, rights group Amnesty International said it condemned the four deaths in the capital and urged the security forces to “refrain from using excessive and deadly force” and urged authorities to release “people arbitrarily arrested for organising the protests”.

Six opposition figures were arrested ahead of the protests on Monday, the first in a series of planned demonstrations, with an alliance of opposition parties and civil society groups known as the National Front for the Defence of the Constitution (FNDC) calling for a significant turnout.

A small number of people took part in scattered demonstrations across the capital, Conakry, but security was out in force, breaking up makeshift barricades and making some arrests as protesters burned tyres and threw stones.

The opposition leaders calling for the protests were blocked from leaving their homes on Monday. (Al Jazeera)