Aminata Manneh, fondly called Minah Manneh, a Women and Child’s rights advocate has gone missing in The Gambia for over 48hrs. Minah, also a mentorship coordinator at Think Young Women, a non profit organization, disappeared after she posted a video of a Policeman assaulting a young girl. The video went viral few hours after it was posted on her Facebook page.

According to sources, a member of Gambia Armed Forces, name withheld for now, was the last person to call Minah’s phone and told her that she was wanted for questioning. The same source disclosed that Minah immediately contacted few friends about her conversation with the said military officer. “She called and told me about the officer who called to tell her that they want to meet her, that was the last time I heard about her, her cell phone is switched off since then” the source added.

Many Gambians both young and old have turned to social media networks calling on The Gambia Government to tell Gambians where Minah is. Bakary Badjie, Program Officer at the Child Protection Alliance and Voice of The Young posted this on his Facebook page “How comes young and innocent Minah Manneh was all good over the years and going about her studies and activism and suddenly disappeared after sharing a video of what we all know is wrong. Indeed she was right when she said “since when does traffic police officer have the right to lay hands on a young school girl … ….”. Uncountable times we read about Police charging people for common assault – that’s what the police officer did and thus Minnah shouldn’t pay any prize, instead the police officer should”.

“Minah is one of our most vibrant members and her passion for promoting the respect of the rights of women and girls shines forth in everything she does. We, therefore, call on the authorities to help us in finding Minah and reuniting her with family, friends and the many people she strives to help each day”. Think Young Women posted on their Facebook page.

The last tweet Minah sent was to Jeffrey Smith, advocacy officer at the Robert Kennedy Centre in Washington DC saying to him that she planned to contact the Child Protection Alliance about the Police brutality video she posted on her Facebook.
Readers would recall that this is not the first time people have taken a stance against brutality or rights abuses and disappeared or are killed. Journalist Chief Manneh disappeared following his arrest by the notorious NIA in front of colleagues, Lawyer Ousman Sillah defended a few cases in court against the government and he was attacked in front of his house and shot in the head, he survived out of sheer luck. Journalist Deyda Hydara had his car ambushed and summarily executed in front of his employees by the notorious government killers, the Junglars. Members of the opposition have been threatened, arrested, tortured  and intimidated by service personnel loyal to Yaya Jammeh.

The latest disappearance of Ms Manneh is similar to that of the two US citizens Ebou Jobe and Mamour Ceesay who disappeared after being picked up by the NIA while on holiday  in Gambia.

Civil society groups and rights activists are calling on the International community to put pressure on the Jammeh regime to produce Manneh and all those reported to have disappeared after being picked up by his notorious NIA who report directly to Jammeh. The list of those that have disappeared now includes the parents, children and friends of those allegedly involved in the 30th December attempt by dissidents from the diaspora and those in Jammeh’s army, who he is currently taking to a secret court martial. The youngest arrested and held since 1st January 2015 is 13 year old Yusupha Lowe. 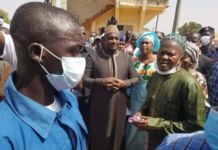 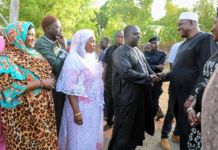