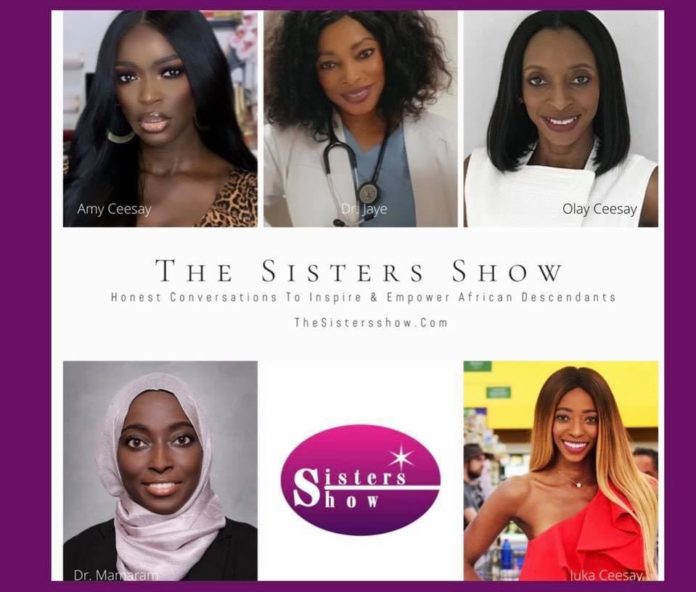 The Sisters Show quickly set itself apart from other shows when it came onto the scene a few months ago. It’s the newest show in town, but the buzz surrounding it is enough to intrude into anyone’s consciousness. Despite their best laid plans to avoid it. And efforts.

What strikes you pretty early on is the total elusiveness of a label for the show. It simply defies categorization. The choice of name lends an air of levity to the show. But appearances can be deceptive.

Started by five Gambian Sisters in the US with the goal of empowering women and inspiring people, especially people of African descent, the show has found itself in trouble of late.

The five sisters who comprise the show are Juka, Jay, Olay, Amy and Mamaran Ceesay. They all have different personalities, but Juka, Olay and Amy are known for their liberal views. Mammaran leads the conservative pack in concert with Dr Jay among them.

Amy is fun and has an edgy flair. She likes to be a goofball, but don’t take that to mean she won’t give you her intelligent opinions straight. She is a model and beauty director, and it’s her job to keep the ladies on the straight and narrow of her runway.

Juka is an entrepreneur who has worked in the entertainment industry in Los Angeles where she is based-she is a joy to watch. She is zany, smart, and also quick to set things straight.

Olay has been a leader in the tech industry for almost 15 years, and works as chief of staff and Vice President in a Fortune 500 company. She is passionate, engaging, and always well-prepared. With Amy and Juka, she forms the crazy, liberal squad on the show. She has a quiet demeanor which she quickly loses once on air.

Dr Jay has worked in the medical field for over two decades. She is precise and a stickler for facts. She is determined to get her point across and holds her own with her fellow medical doctor, Mammaran, on a show where the other ladies often do not share their opinions.

With two medical doctors in the house ,one would have thought common sense is in good supply. If it’s there at all, it’s not evident. That’s a graphic way to put it, but I hope it helped to get my point across. And you will discover soon enough I’m right.

Discussing relationships in the Hot Soup segment of the show looked good on paper, until Amy blurted out Gambian men are not romantic.

The story was picked up by The Gambia’s version of TMZ Whatsongambia. This sparked a furious response from angry men whose bruised and battered egos left them screaming liberal abuse at the model for giving them low marks in matters of romance, something they consider themselves skilled at, and always straining to improve.
‘Amy walahi I can give you a good experience, I’m ready to spoil you with romantism’, Da Saints Fadera, a renown Gambian satirist and young politician counters while offering to show his supreme romantic skills. I wonder if his offer stands a cat’s chance in hell given Amy’s declared total lack of interest in Gambian men.

For Bakary Sanyang, national pride is at stake and Amy’s comments represent a call of duty to salvage the national brand. He sees an opportunity to shape perceptions and served an ace. He riposted: ‘Maybe the ones she interact with ain’t romantic. That’s why whenever you have a date or outing with someone from another nation do it well because you are representing the whole nation’.

But in their defense, the show’s knack for getting on people’s nerves is counter-balanced by more serious discussions on women’s health, disability, cancer awareness and international development.

But that’s to ignore the fact that one of the more reckless freaks on the show, Juka, recently stated women should not be checking their husbands’ phones to avoid marital strife. Juka espouses the philosophy of ‘feminine energy’ which aims to achieve holistic wellness in relationships.

But social media got zero chill. Deservedly, she was roasted with a vehemence that a lesser show wouldn’t have survived in the era of pervasive cancel culture.

And that’s the problem with The Sisters Show. Its weaknesses are its strengths. Highly educated, empowered and independent, they don’t chafe at making their opinions known on issues which never fails to leave you entertained and educated all at once. And pissed off sometimes if you don’t share their views. Even the hot button issues of racism and criminal justice reform in the US, where they are domiciled, haven’t gone unscathed.

Although The Sisters Show airs every Saturday on Facebook, I won’t be tuning in without company. Because I can’t, on account of a sense of guilt keeping a good thing all to myself.

But you sure can count on the controversial Hot Soup section to rile you up one way or another. Which I don’t think am duty-bound to deal with all by myself. Because I can’t. As a media friend observed, ‘nothing is off-limits on the Sisters Show’ which I hope gives you an enhanced understanding of my reluctance in case it makes you think less of me.

Now am being ridiculous. That’s exactly the kind of paranoia that makes me weary of spending time with myself on Saturdays without The Sisters Show.