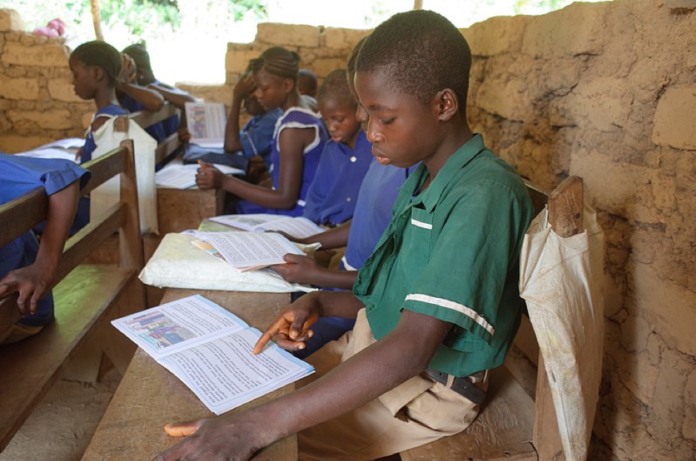 The Free Quality Education Programme was officially Launched by President Julius Maada Bio on August 20th 2018. This was in line with his top campaign promise which targets developing the human capital of the country through education, skills training, health and the provision for and protection of vulnerable Sierra Leoneans. This good initiative has over the years been met with its own fair share of challenges including:

There is currently a high number of unqualified teachers.  Data suggests that in total 48,761 teachers representing 58.7% have the required minimum qualification to teach at the various school levels, which should inform us that a lot more teachers currently in the classroom are untrained and unqualified.

In primary, despite the FQSE, parents’ contribution accounted for 24% of the total resources, indicating that even with FQSE, some schools are still charging some levies. Only two thirds to three quarters of the resources flowing into junior and senior secondary schools come from the government.

Overall, salaries and wages account for the highest spending item for schools at 45.4% followed by rehabilitation at 30% and acquisition of learning materials at 20% which are the key inputs to any functioning school.

Another challenge the School Census Data brought to the fore is that the expansion in school infrastructure has not corresponded with the growth in student population. The number of schools increased from 10,747 to 11,180, an overall increase of only 4%.

6.7% of the classrooms in basic and senior secondary are makeshifts with grass, wood, palm fronds and other local materials.

Some Districts fare abysmally with water provision. In Koinadugu District only 7.7% of the schools in primary and 18% in secondary have access to safe water (piped and borehole).

In approved schools, the results show that the toilet ratios when considering only toilets in good conditions are unbearably high (47 learners for every toilet in pre-primary, 124 in primary, 108 in Junior secondary and 157in senior secondary).

Despite this state of affairs, only 1 in 10 schools reported having ramp and special latrine for pupils with disabilities, and only 6% of schools said they provide special cubicles for girls during menstruation.

Another shocking revelation the School Census unearthed is that nationally, only 2% of the schools have a functional science laboratory, while 6% have a functioning library. A majority of these are in senior secondary schools.

Further analysis by levels shows that 2%, 16% and 9% respectively of primary, senior and junior secondary schools have access to computer services. Only 7%, 3%, 1% and 1% respectively of Senior, Junior, primary and pre-primary schools are connected to the internet.

Amidst these challenges the government of Sierra Leone has increased its expenditure on national exams (NPSE, BECE, and WASSCE) and tuition fees by over 400 %

The FQSE programme has also resulted in a tremendous increase in student enrolment nationwide. The number of learners enrolled in schools increased by almost 700,000 due mainly to the commencement of the FQSE.

The Gross Enrolment Rate (GER) in the primary has increased by 30 and 34 percentage points for boys and girls respectively between 2018 and 2019. 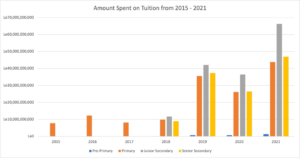 Data at the Ministry of Finance show that the annual teacher’s wage bill has also now increased from Le 474.16 billion in 2019, to 636.62 billion for 2020; this includes additional costs of up to 4000 new teachers that were recently brought on the payroll. A new set of 1,000 teachers have been recruited for 2021 further expanding the teaching wage bill.

“The support we’ve got for education in the last couple of years is unprecedented. We have large government commitments, have the largest multi-donor trust fund ever at USD 72million with five major development partners, and now see some private sector contributions as well. Recently, we became eligible for up to $40m GPE transformation grant because of the work we have done,” Minister of Basic and Senior Secondary Education Dr. David Moinina Sengeh said.