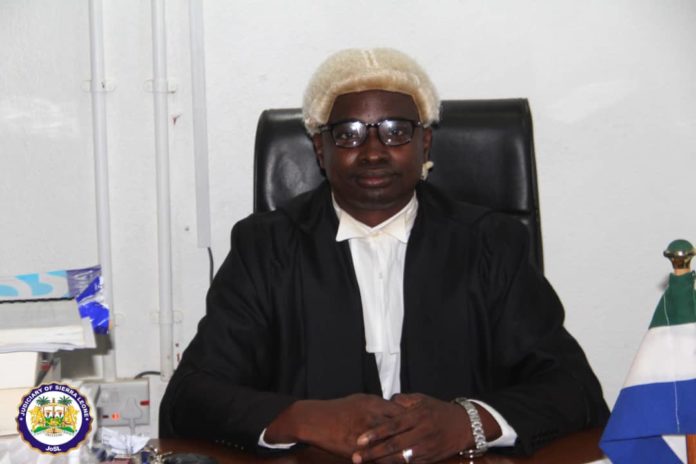 According the particulars of offence, the convict, between 1st March to 2nd April 2020 at Freetown in the Western Area of the Republic of Sierra Leone, made an indecent material of the victim when performing oral sex. On Count two, the convict circulated a nude video of the victim to the victim’s fiancé residing overseas.

In his judgement, Justice Momoh-Jah Stevens said the accused person was charged with four counts of sexual related offences and he pleaded not guilty to all counts as charged. He noted that the Prosecution made a successful application for the accused person to be tried by judge alone pursuant to Section 144 of the Criminal Procedure Act 1965 as amended.

He continued that the Prosecution presented three witnesses and were able to prove that the phone that was used to do the sexual activity was owned by the accused. He added that the activity itself was done without the consent of the victim.

Justice Stevens said the Prosecution had proved its case beyond reasonable doubt which is the standard in criminal law, stating that the accused is found guilty as charged in all four counts.

In his plea mitigation, the lawyer representing the accused, C. Taylor-Young Esq., said he (accused Ahmed Issa Kamara) is a first time offender and a young man that has prospect to grow affirmatively. Referencing Section 18 of the Sexual Offences Act of 2012, he pleaded with the judge to either sentence the convict or to fine him.

After his conviction, the accused appealed to the judge to temper justice with mercy.

Delivering his sentence, Justice Stevens cautioned that men should be mindful in treating women as they should be well respected.

“Circulation of sexual video is uncalled for and unacceptable,” he said, and therefore sentenced the convict to five years each for all the count charges or to pay twenty million Leones for each count. In addition, he said the convict should pay a mandatory compensation fee to the victim in the sum of twenty million Leones on or after he had completed his sentence of payment of fine.

He said the accused should either pay the fine plus the twenty million Leones compensation fee or be imprisoned for five years.

Circulating sexual material after having sex is one social menace that continues to be very disturbing to the sight and hearing of decent civilized people.

People still wonder why a guy can have an affair with a lady, film the moment and circulating it to people, including the lady’s fiance.

The judgement is believed by many to send a strong warning to prospective offenders.