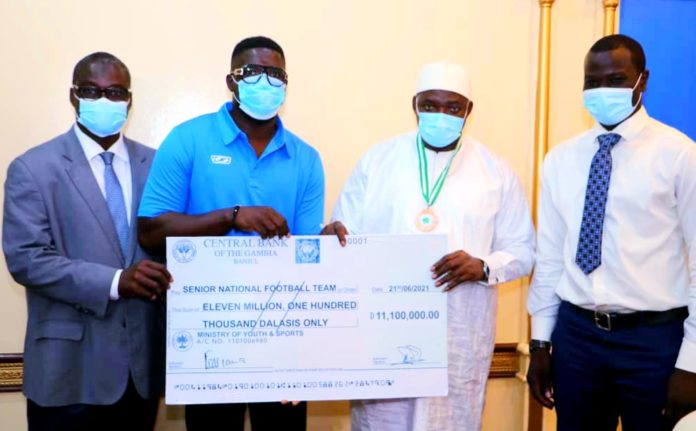 “The awards are given in recognition of the teams’ outstanding performances in various international competitions particularly the Scorpions for The Gambia’s maiden qualification in the CAF Africa Cup of Nations finals in Cameroon,” State House said in a statement.

It added: “President Barrow made the presentations today at the State House in Banjul. The ceremony was witnessed by representatives of the various teams, Technicians from GFF and Volleyball team as well as the athletes.

“In their vote of thanks, Tijan Marr, captain of the U-20 squad, and Lamin Jammeh, 1st Vice President of the National Volleyball team, both praised President Barrow and his government for the award and continued support for the development of sports in the country.

“The Honourable Ministers of Youth and Sports, Tourism and Culture and Fisheries joined the President to welcome the team.

The presentation comes amid the nation’s senior players opting not to meet the president as they protested the money government wanted to give them was small. They were invited to State House but declined the invitation.