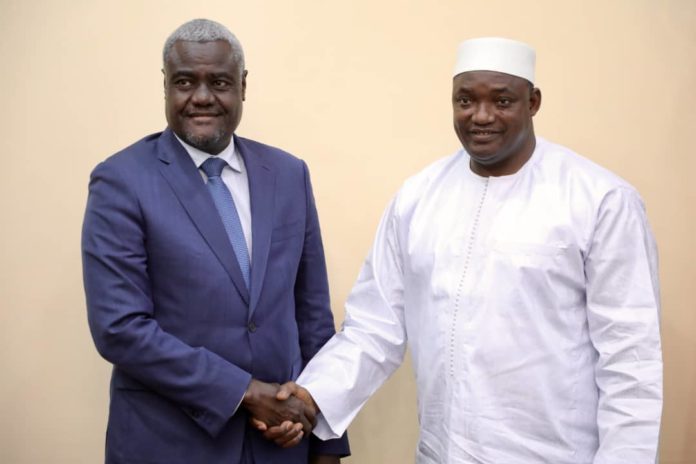 The African Union Chairperson Moussa Faki Mahamat has commended President Adama Barrow  for significantly consolidating the values of democracy, good governance, and peace and security in The Gambia. He said President Barrow is setting the country on the right path despite inheriting a difficult situation, stressing that he has succeeded in opening up the country’s democratic space.

‘’You have inherited a difficult situation but you have set the country on the right path and the right direction. We happy to learn that you are reforming the security sector.’’, he stated

His Excellency, Faki Mahamat made the comments when President Barrow received him in audience at the State House in Banjul.

Based on the foregoing, AU Chairperson said it is incumbent upon the Union to support and consolidate the gains in governance so far made by the Barrow government. He added that it is the duty of the African Union to meet the President and discuss important national issues with him in order to remedy the bottlenecks. He recollected that the same reason motivated them to send an African Mission Team in 2017 to support the country on its security sector reforms.

In welcoming the chairperson, His Excellency, President Adama Barrow expressed great delight and honour hosting him in the country, recollecting that their first meeting took place when he was only six months into his presidency. The president described the meeting as a great success and a personal motivation for him as a head of state. President Barrow emphasised the importance of peace and security in the development and progress of Africa, saying that he has a lot of confidence in the office of the AU Chairperson in attaining peace and security on the continent. He added that African integration can only be realised if peace, security, and stability prevail.

The president expressed satisfaction that the new wave of democracy in the country is widely embraced, which is why his government now focuses on governance and institutional reforms to ensure respect for the rule of law, independence of the judiciary, and the protection of fundamental human rights.

President Barrow also informed the Chairperson that his government has embarked on sectoral reforms, while urging AU, ECOWAS and other development partners to support his transitional programmes to attain reforms in key areas, such as, agriculture, security, the civil service, and health sector.  He said the security sector reforms include downsizing the security and to further build the capacity of security officials to be responsive to the need of the people.

He thanked AU for sending in experts to support the reform process, assuring him that the outcome would lay a strong foundation for a level playing ground for elections in 2021.

Minister Tangara disclosed that the Chairperson has committed to advocating for the country’s development priorities. He commended the Chairperson and the Commission for his efforts to establish peace and stability on the continent, citing the recent peace-deal brokered in East Africa and the breakthrough in Darfur.