President Barrow gets tough, but…! 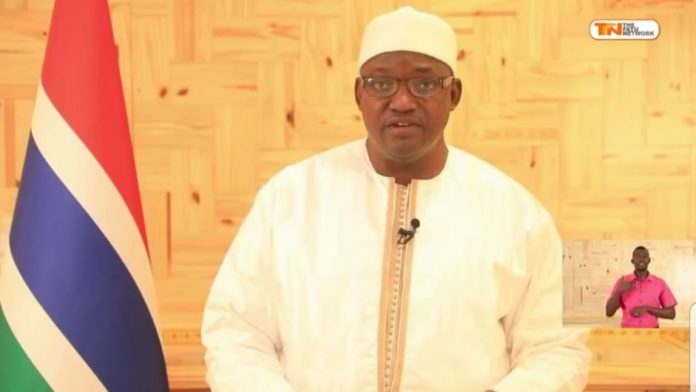 A soft-spoken leader, President Adama Barrow uncharacteristically toughened his tone as he addressed the nation to outline measures to combat the recent uptick in crime in the Gambia. “This must stop, and it must stop immediately!” the president stressed as he spoke directly to the bandits who have wreaked havoc in the country in recent times. The speech came following persistent calls on the president to address the nation on an issue that has posed a threat to national security, particularly since his Koriteh speech was widely criticized for failing to address the matter adequately.

Mr. Barrow predicated the surge in crime on the prevailing atmosphere of freedom and democracy in the country. “Unfortunately, it is now evident that some individuals and groups among us are taking advantage of the prevailing free and democratic environment to engage in violent-related crimes, such as illegal possession of arms, robbery, burglary, rape and various types of assaults, some of which tragically end in fatalities.”

Though the president has suggested that the rise in crime is contingent on the current atmosphere of freedom, I beg to differ. Factors such as inadequate resources, lack of leadership, abject poverty, high unemployment, and the lack of opportunities, particularly among the youth, need to be duly considered. These issues need to be addressed as part of the Government’s long-term strategy to eliminate crime. People can concurrently enjoy freedom and peace, for one does not negate the other. The most peaceful nations in the West equally enjoy democracy and freedom.

Moreover, the president’s speech, which lasted for about 7 minutes, was bereft of specifics about how to go about putting a definitive end to the menace. Though Mr. Barrow has called on the national guard to be on alert for possible deployment, he did not say where the funding would come from and did not specify the scope of their mandate when they assume the responsibilities of the police. The paramilitary police usually come under criticism for their heavy-handedness in dealing with civilians.

In his speech, the president made no mention of the security sector reform program. I believe that urgent measures should be taken to set it in motion to ensure security and safety in the country.

Nonetheless, the President should be commended for heeding the public outcry by addressing the nation. I hope that President Barrow will take a holistic approach in addressing and resolving security challenges facing the country. As he pointed out in his speech, all State organs must join forces to complement each other, given the gravity of the situation at hand.

Will UDP show leadership and responsibility?