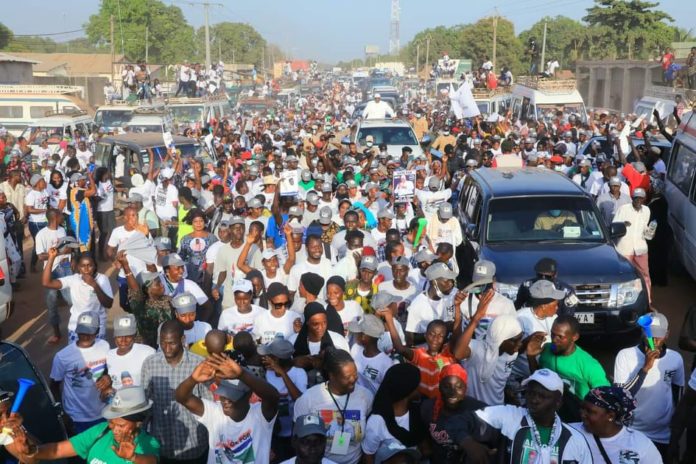 The National People’s Party has issued a statement expressing gratitude to citizens for showing love to President Adama Barrow on his return to Banjul on Sunday from upcountry campaign.

A statement by the party said: “His Excellency, President Adama Barrow, Secretary General and Party Leader of the National People’s Party (NPP) on behalf of the NPP National executives, members and supporters of all partner parties and independents express profound gratitude to all Gambians for the unprecedented show of love demonstrated during his 2021 Presidential campaign in rural Gambia.

“Thousands of Gambians attended his political meetings and lined up streets in their various settlements as President Barrow’s motorcade slowly drove passed.

“In all the meetings, Gambians spoke with common determination to vote President Barrow back into office with an absolute majority to allow him continue his development programmes.

“While in rural Gambia, President Barrow assured Gambians of his resolve to deliver in  the area of infrastructure, agriculture, energy, education, skills development, youth and women entrepreneurship, health care, water and sanitation, sports development, democratic gains and the rule of law. Barrow told Gambians these areas will take centre stage in his next government agenda.

“Throughout the Presidential campaign tour across the North Bank, Central River, Upper River and Lower River Regions over ten thousand Gambians defected from UDP and GDC to the National People’s Party.

“Leaders of the various defectors hailed President Barrow’s astute leadership and development agenda as inclusive and hence the necessity to vote for him on the 4th December, 2021.

“The NPP and its allies are grateful to Gambians for the patience, tolerance and endorsement of its campaign.

“Special commendations to all regional chairmen,  constituencies, wards, districts and village chairmen as well as committee members and supporters of the NPP-led Grand Alliance.

“I Am the Architect of the TRRC, It Will Be My Legacy”- President Barrow Says

President Barrow vows to put interest of Gambia first as he...