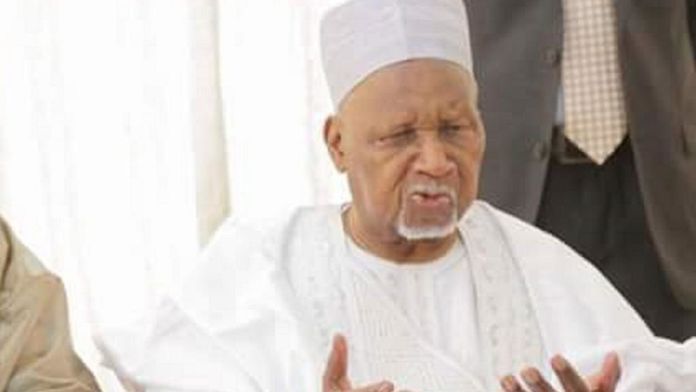 I never had a close personal acquaintance with the first President of The Republic of The Gambia but I was close enough to have had the great fortune of enjoying the fragrance of Peace and love that his  persona gracefully manifested throughout his historic life.

I was friends with the children of his staff who lived in the residence adjoining State House. Together with Karlmen (now a catholic priest) and the other kids, we would go to pick his dog, Haiko, for a stroll on the beachside. When we had the occasional parties, we would borrow furniture from State House. That is how affable Sir Dawda and his household was.

Growing up I became familiar with his peerless charming voice especially when he spoke the English Language to address the nation on official functions. And that is why in response to a request from a local journalist on how I would remember the former President, I said this:

“The name Sir Dawda Kairaba Jawara is synonymous with peace, that is what I will remember him for most. But of no less importance is Sir Dawda’s very charming, inspiring voice; that too, I shall never forget Inshaa Allah.”

When I became Presidential Affairs Minister, certain matters concerning him fell on my desk. With the help of businessman, Amadou Samba, the tough assignments were smoothened out with joy to be of service to a most worthy son of our soil.

The demise of the father of our nation is indeed a most heartfelt loss for all peace-loving, patriotic Gambians. To write a fitting eulogy for a distinguished statesman like Sir Dawda is a Herculean task for any mortal being. I make no pretence to be up to the task; but when a request came from a major international media outlet, I obliged with a few thoughts:

The passing of Sir Dawda Kairaba Jawara, first President of the Republic of The Gambia, and co-founding father of (what is now) the African Union, represents the end of an era.

Sir Dawda, carried with him the spirit and hope of his independence colleagues like Kwame Nkrumah. His demise is an important moment of reflection as we move forward as a continent, Independent, by flag, but with lots of work still outstanding to stand on our own [feet], united.

Known for his humility and respect for democracy and human rights that earned The Gambia the position of Headquarters of the African Commission for Human and People’s Rights, Sir Dawda inherited a colonial legacy of a small country whose viability as a nation was questioned by no less an authority than the Lords British Empire.

Within a quarter of a century, President Jawara proved to the world that The Gambia, though small and devoid of much natural resources, could thrive in peace and freedom and play an important role in the comity of nations. It was under his leadership as Chairman, that ECOWAS took the bold and unprecedented step of coming up with a multinational force (ECOMOG) to stop the carnage and re-establish peace in Liberia.

Sir Dawda passes on with a respectable legacy and joins his brothers, the Nkrumah’s on the other side. The question is: will my generation rise up to the occasion to complete the African Independence project with the cardinal principle of democracy and respect for the views of the opposing camps in peace and tranquility.

Let history be the ultimate judge. But the preliminary score on the Independence generation’s card, is quite promising.

Having written the above piece, my mind still searched into my heart for more words  to honour Sir Dawda, and so my muse spoke:

I was not your biggest fan

Through youthful years of angst

With age I came to understand

The warp and woof of this land

Peace and love, sun and sand

A voice for all in our homeland

Carrying a rose and olive branch

Peace in Liberia was your stance

Not wavering for a single instance

God bless you further in Al-Jannah

I was privileged to be an honoured guest in Gunjur, just a few days before Sir Dawda’s demise, where the young people of that great town and their partners embarked on a major tree planting exercise. During this programme, environmental activist, Kemo Fatty, of the Greenup Gambia movement, brought copies of Sir Dawda’s famous Banjul Declaration and asked all participants and guests to stand up and read it aloud; which we did in unison with a solemn disposition, thereby relaunching Sir Dawda’s sacred proclamation.

Speaking to journalists on the sidelines of that occasion in Gunjur I told journalists that the best way for Gambian youths to honour Sir Dawda would be to make sure we implement his vision as proclaimed in the Banjul Declaration.

Indeed the old man, Sir Dawda, has lived a great, fulfilled life and he has left us with remarkable lessons. The tree he has planted shall grow and his mission lives in the veins and minds of the next generation as clearly demonstrated in Gunjur.

May Allah forgive our former President for his shortcomings and admit him in Jannah. And for now and ever we shall be repeating the glorious words of Gambian artiste Jali Madi Kanuteh who took inspiration from his own late father to chant “Dawda Jawara abaraka!”