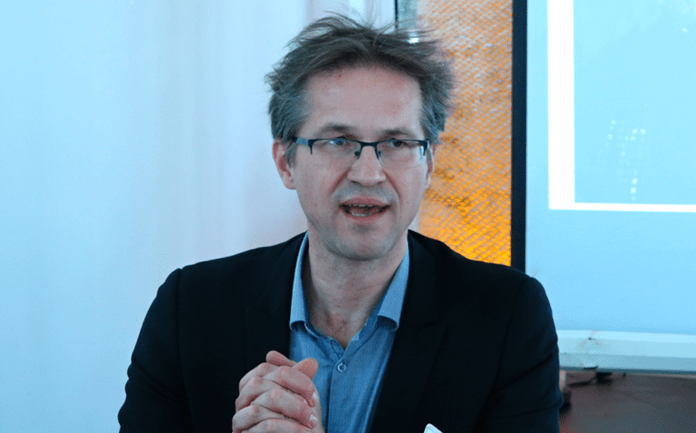 The director of European Stability Initiative, a Berlin-based think tank on migration matters has said thousands of Gambians in Germany live in an atmosphere of fear and hopelessness.

Gerald Knaus at a news conference at Coco Ocean on Friday said most Gambians in Germany go to bed at night in fear of being woken up by police to be deported.

Mr Knaus who is on a visit to the country to engage stakeholders to pave way for a win-win cooperation on migration between The Gambia and Germany said: ” Most (Gambians) of them are in one part of Germany, the state of Baden-Wurttemberg which has 11 million people. It’s one of the richest parts in the world. That’s where the car was invented, that’s where Mercedez Bnez comes from. It’s very rich, it has 2% unemployment. By coincidence, most Gambians were sent there.

“Another reception centre I visited three weeks ago, there 100 people in there, all of them from Africa, 40 of them are Gambians. I talked to them, their life looks like this: they go to bed at night in fear of being woken up by the police to be deported. They don’t really have a job to look forward to. They wait. But what can they do?

“The deportation from this centre and I talked to one young Gambian who had been deported three times to Italy because the deportation don’t take place to The Gambia. They are so-called transfers from one European country to another. Last year, Germany transferred 2800 people to Italy. But we have no borders in Europe, so there are no border controls.

“So these people then come back a few weeks later through a bus to Germany. This young Gambian was deported three times but he was back in Germany. This creates an atmosphere of fear. There is no hope and there are thousands of Gambians who risked everything and are now in this position in Germany and a similar number in Italy.”

Share
Facebook
Twitter
WhatsApp
Linkedin
Viber
Previous articleImam Fatty lashes out at OJ and Touma Njie, argues duo could have been BEHEADED if they’d made their mosque comments in Omar’s time
Next articleGroup that wants Barrow to do five years targets staggering 300,000 people but date of protest is yet to be confirmed