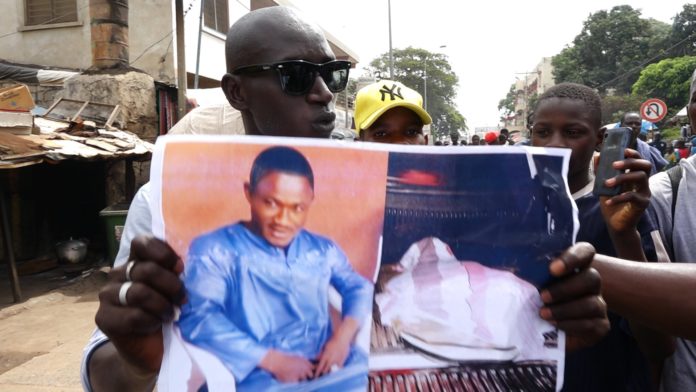 The Minister of the Interior Ebrima Mballow has said that Ousman Darboe did not die under police custody.

Darboe died last Tuesday but his death has been linked to torture allegedly meted out to him by police. Mass protests erupted in Serrekunda on Wednesday as soon as news of the 33-year-old businessman’s death emerged.

The police anti-crime unit headquarters in Bijilo was the epicentre of the protests as angry youths clashed with police as they attempted to overrun the ACU compound. The protests continued late Wednesday evening in which police stations were vandalised and the police ACU commander’s house set on fire.

On Friday, the Minister of the Interior Ebrima Mballow spoke on the issue, saying his ministry “deeply regrets” the death of Ousman Darboe.

“Mr Darboe whose death has led to allegations of police brutality followed by angry demonstrations on Wednesday was a known asthma patient who was detained by the Police Anti-Crime Unit and subsequently granted bail. He died a week later at a local health facility and not under police custody,” Mballow in a statement he read on GRTS said.

Mballow added: “However, my ministry takes allegations of torture and police brutality very seriously and have attentively listened to all your grievances, complaints and resentments against our law enforcement agents.

“Therefore, a Committee of independent investigators from all the security sectors has been constituted to thoroughly investigate and determine whether Mr Darboe was tortured as alleged. Should the investigation reveal that he died as a result of torture, those implicated will face the full force of the law.”