This moment in history is an extraordinarily emotional moment for Gambia that could end the killings, kidnappings, torture, extortion and other traumas. Whiles Gambians are making crushing sacrifices, most of the so called marabouts are helping Yahya Jammeh and his agents in fulfilling his beguiling bad wishes, destroying our societies and engaging in hypnotic bewitchery by giving them concoction to poison our water good supplies or victims that meet a specific criterion to sacrifice. And the notion that they can force people to vote for Yahya Jammeh by feeding Gambians with forbidden meat like dog to barking to the polling booth or that of donkey to carry baggage thrown on us is ridiculous and very hateful. Chmm! This is very alien to our culture and belief but the regime has swept along so many wired things in Gambia since coming to power by coup. Expressions of concern by the religious leaders about the regimes actions using spells to cast on people and killing people are very few because of example set for those who dare to question them. The APRC regime is eager, as usual, to go after the religious leaders because they are not worried anymore of public perception. Those who speak up are either serving jail time if they are luck, some killed and few found their way in exile.

The Gambians wants no more of Yahya Jammeh and his regime because they have been fully unmasked by the crimes they are committing on our people. We find it hard that any work done for Yahya Jammeh by these so called marabouts involves terrorism on Gambians and economic worry. In another reference, either way, a central question now for the marabouts who prescribe Yahya Jammeh to kill our virgin girl, force amulet in babies’ throats or feed infants to crocodile is —what should we do with them post-Dictatorship era? The fact makes us wonder whether the way forward involves undoing your evil deeds spells now or we should hold you responsible. This marabout business has been very corrosive to country for many reasons. The unspoken assumption is that it has caused families a lot and now its attaching itself to dictatorship to ride on our cash. One forward-looking way for marabouts and those agents carrying their spells is to own up to the fact that your work as enablers ultimately serves no one.

Yahya Jammeh has tried everything for us to turn against each other based on divisions of lineage or religion but it didn’t work. The regime after failing Gambians on all levels, they are trying another end run thinking we can blindly follow them to destruction. How can someone give directions for people to carry such evil acts for him and at the same time claiming he cares about you and the poor farmers. Now the government goes to foolish lengths to even refuse handing over dead bodies. God does not like evil and will expose people who carry out evil act. They forget that sometime somewhere someone will get the information and pass it along. Yahya Jammeh sold himself to Gambia by hiding the price tag of his evil deeds, and twenty-two years later it’s clear that we are paying for it dearly with our blood, our sweat, our lives and our identity as Gambians. He will salute marabouts wishes but burnt economist like koro Ceesay when he told them his wishes against corruption.

Lastly, my advice to Gambians is to pronouns GOD’s name and seek refuge from evil before eating or drinking anything from Yahya Jammeh. One of the companions of the phrophet (SAW) was given poison in a vial to consume but he recited an important supplication “Bismillahi Lladhi la yadurru ma`a smihi shay’un fi’l ardi wa la fi’s sama’i wa huwa’s sami`ul `aleem”. That translates to (‘In the Name of GOD, with whose Name nothing on earth or in the sky can harm. And He is the Hearing and Knowing.’). As for the security agents or agents carrying evil deeds on Gambians yearning to breathe free from dictatorship, being a soldier does not nullify your sins or crime and your sins are not redeemed good intentions thereafter.The conditions of forgiveness is 1. Admitting your sins. 2 Seeking forgiveness and 3. Not returning to do it again. The question which should be asked now to all politicians is — Will you consult a marabout for our countries affairs? If they mumble on that question, let move on to the next candidate. We have suffered too much and it’s time to care about our people.

By Habib ( A Concern Gambian) 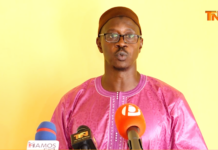 MUSTAPHA CEESAY – COMMENT: General Lamin Bojang is a dignified son of the land