Since the 7th November 2014, a group of 12 men, women and a boy, is held incommunicado in The Gambia, West Africa, on suspicion of being gays and lesbians or LGBTs. More arrests are anticipated from a list with about 200 names compiled by the country’s secret police, the National Intelligence Agency (NIA).

Apart from the usual written protest by rights groups and the prejudicial remarks by religious hypocrites, no prominent person, Gambian or non-Gambian, has gone further in taking decisive action for the detainees to be given the chance to defend themselves before the courts of competent jurisdictions that should prove their guilt. Until then, they remain innocent.

Since the publication of my thought-provoking essay titled “The Gambia’s problem is bisexuality and religious hypocrisy; not homosexuality”, I find myself in the national discourse on this sensitive topic. Some bigots tried to blackmail me over it and called me all sorts of names.

During my first Gambian visit in 2012, I was surprised by live viewers’ questions on homosexuality when I appeared on that taboo-shaking episode of The Fatu Show. While many people chose silence, blind support for the anti-gay narrative or half-hearted calls for the respect of pluralism, I chose to shake the conventions by placing the mirror before The Gambian Society. In my that “Whats On Gambia” interview, I was asked about homosexuality. Every now and then, people do contact me on my stance on the issue.

This statement explaining the purpose of our NTI XANNEN fundraiser is not about fighting the government or promoting homosexuality and queer lifestyles. It is about strengthening social justice and equality before the law, be it Common, Customary or Sharia, without prejudice.

Even those hiding behind religion and culture to spew out homophobic comments cannot quote relevant sections of the Sharia code that call for impunity. All progressive and civilized religions and cultures create rooms for the due process of the law to be applied for all without discrimination. If someone is accused of adultery, theft, murder and other crimes in a Secular or theocratic context, the adjudication process must follow proper procedures.

When Amina Lawal of Northern Nigeria was dragged before a local Sharia court on allegations of adultery, a crime many hypocrites condemning homosexuality are committing round the clock, the higher courts in Nigeria subsequently threw out the case as Mrs Lawal was not treated fairly from the onset.

Defending religion and culture without respecting their prescribed religious guidelines on the delivery of justice is outright hypocrisy. It is unconstitutional, un-Islamic and un-African to detain people or deny them their basic rights without the due process. The suspected Gambian gays and lesbians were placed in detention for more than three weeks. This is far beyond the 72-hour constitutional detention limit guaranteed to every human being within the Jurisdiction of The Gambia. This denial of rights is fundamentally wrong and overtly un-Islamic. The accused persons should either be taken to court or sent back home to rebuild their livelihoods that are now destroyed through stigma and prejudice.

My NTI XANNEN medium and I are launching this fundraiser as part of my established humanitarian engagement both in public and private. When the GAMCOTRAP ladies were dragged to court, I participated in a Maafanta.com fundraiser for them. When domestic journalists were arrested for requesting peaceful demonstration permits, I contributed to a fund-raising appeal for them. I can go on and on.

As a goodwill ambassador for minorities and threatened peoples, I cannot cherry-pick by speaking out for vulnerable women and natives and leaving out the sexual minorities.

Nobless oblige. Since people are reluctant to fight harder for persons suspected of being Gambian LGBTs for whatever reason, I cannot abandon my social responsibility. Unlike some of the lousy moral and political hypocrites here and there, I am not desperate for government jobs and contracts and I do not need the blessings of any hate preacher to go to heaven hereafter.

If compassion and humanitarian solidarity are crimes before God and Man, then I am ready to go to hell or die in jail. I am not begging or running after anyone to contribute to this fundraiser as this is not a common begging programme for charities. I am providing my brand name and status as platforms for those who want to promote social justice and make a concrete point against discrimination of a voiceless minority that is being abused as bargaining commodity for religious and political agenda. Those who wish to contribute are welcomed.

The detractors who just want to be spoilers and engage in the usual “garewalleh”, gossips, idle talks and fabrication of tales against this noble cause in order to appease the establishments are free to dance on their keyboards and smart phones against me.

This fundraiser is meant to primarily support the suspected LGBTs in their quest for justice. Depending on the amount raised, the balance would be used to help them rebuild their lives with income-generating activities that could make them live independently and productively in society.

I will remain accountable to only those who contribute to the fundraiser through the indicated GO FUND ME portal below or other anonymous means that can be explained upon request to my email or inbox.

As the saying goes, put your money where your mouth is. Anyone who is interested in being kept updated on the way the generated funds would be spent in supporting the suspected LGBT detainees in The Gambia, he or she should first chip in something to prove his or her seriousness. A confidential line of communication with donor/patrons will be maintained and the strict Data and Privacy Protection Laws of Germany will be applied.

Those who with serious questions to ask are free to email me at: 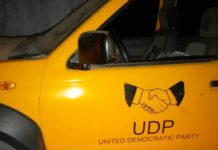 Mechanic in trouble as UDP makes it ‘categorically’ clear he is not a member of the party and that he betrayed party’s trust by...