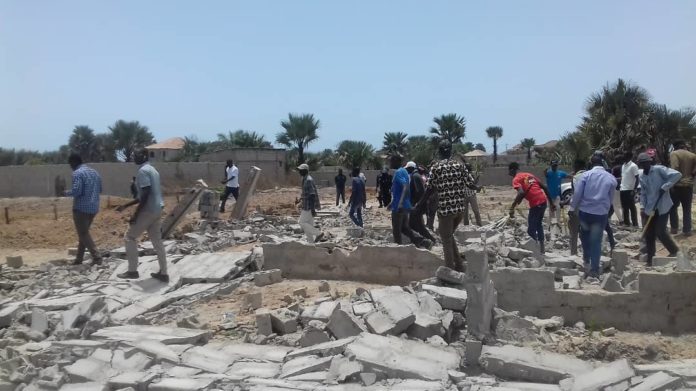 In an extraordinary assault on law and truth, Mr Buba Sanyang (the Permanent Secretary) at a press briefing 02 June 2020 stated the position of the Ministry of Lands (the Ministry) on demolitions: “We are planning to embark on another massive demolition in areas where lands allocated to people by government are annexed by people who have decided to build structures on them. This will come as the second phase demolition to be carried out to enable those people to acquire their lands. Government will not allow people to annex these spaces.”

Herein the lawless propensity of the Ministry!

Under the law, Government can only acquire in the public interest and lands so acquired must be used only for public purposes. The Permanent Secretary must study his critical brief.

He also asserted “… the government will not allow people to take the law into their hands by appropriating public places for their own personal use”.

It is the Government acting badly, and in complete defiance of the law.

In a bid to make more effective use of the Government megaphone, the Permanent Secretary claimed “… the Department of Physical Planning sent a letter to the alkalo of Sukuta in August 2007 informing him that the state was planning to use the land located between the Old Salagi Layout and Pateya village as a residential layout…The alkalo was advised not to process any documentation for land transactions or development for that area and that anyone who had questions should consult the department. This was made very clear to the alkalo”.

Contrary to the assertion of the Permanent Secretary, the competent lead department on land acquisition is the Department of Lands and Surveys not the Department of Physical Planning that purportedly “sent a letter to the alkalo of Sukuta in August 2007”.

As if to put the icing on the cake of state vandalism and utter lawlessness, the Permanent Secretary rather pleadingly intimated to the briefing that “section 38 of the Physical Planning and Development Control Act 1991 prohibits people building without obtaining development or building permit”, and that “… all developments without permit have consequences”.

I am aghast at the cruelty of the Ministry, at the cruelty of its constituent departments of Land and Surveys, and Physical Planning and Housing (DPPH), at their routine violations of the law, and the evasive and secretive conduct underlying their operations.

Aghast at the unwillingness of government to step in and wipe the tears of numerous ordinary citizens dispossessed of their lands by the cruel twins of land administration under this lawless and rampantly corrupt Ministry.

In my possession is documentation including a completed lease originating with the Department of Lands assigning dozens of plots, in some cases more than seventy compounds to individuals out of lands stolen from their customary owners in Salagi. They are refused clearance for development or other purposes but those who purchased these lands through dubious channels including from staff of the Ministry’s constituent departments of evil have no issues with clearance.

And all these lawlessness under purported colour of law and public authority!

Irrespective of the Permanent Secretary’s position on the State Lands Act 1991, the Land Acquisition and Compensation Act 1991, the Physical Planning and Development Control Act 1991, and their subsidiary legislations, the controlling law on land acquisitions is section 22 of the 1997 Constitution of the Republic of The Gambia (the Constitution).

Any law at variance with the Constitution is void to the extent of the inconsistency.

In particular, the lands at Brusubi, Salagi, and Nemasu in Sukuta, and those involving New Yundum, and Brufut, all in the Kombo North District of the West Coast Region, Brikama in Kombo Central, Tujereng and Tanji in the Kombo South, and Bakau in the Kanifing Municipal Council, were trespassed upon by agents, or purported agents of the Ministry on the pretext the lands concerned were confiscated and reserved by Government.

Complete nonsense with no iota of truth!

As Government has no land in these areas, it cannot confiscate and reserve same.

In the event Government requires use of private land, it must follow a stipulated legal process. It is for no reason that “Protection from Deprivation of Property” is included among the fundamental freedoms and entrenched.

According to Section 22 of the Constitution:

No property of any description shall be taken possession of compulsorily, and no right over or interest in any such property shall be acquired compulsorily in any part of The Gambia, except where the following conditions are satisfied:-

Of significant import, the Government must pay adequate compensation.

I must stress that the compensation envisaged by the Constitution is not stealing lands from two people and relocating one of them in the other’s property. Where appropriate, there must be both monetary compensation and resettlement as enjoyed by those in Half die affected by the Banjul Port expansion who were monetarily compensated and settled on Bakau lands.

Under section 2 of the Land Acquisition and Compensation Act (LACA), “public purposes” is defined as including:-

And contrary to the assertion of the Permanent Secretary, section 4 of LACA states that “the Minister may acquire any land for a public purpose, paying therefore such consideration or compensation as may be agreed on or determined in accordance with this Act”.

It is a fact that senior employees of the Ministry’s twin departments of evil are living on lands stolen from their customary owners. It is also true that they sold many other lands across Salagi either directly or through third parties to private buyers.

A victim of land gangsterism in Sukuta was told a number of stories by agents, or purported agents of the Ministry’s twin evils. Some told him there are underground cables on his land placed there for special purposes, and others that the Government was creating a housing complex to be used as rest houses by holidaying Gambians settled abroad.
Whatever the truth of these claims, they have nothing to do with the proprietary right of the traditional owners of these ancestral Salagi lands.

The Salagi lands were stolen and not acquired by delineated legal processes.

Consequently Government cannot allocate what it does not own through legal acquisition.

Assuming these are lands which legally belong to the Government – and I reject that emphatically – the Salagi demolitions were conducted in violation of due process according to procedures laid down by DPPH itself.

The Ministry is wrong and the Permanent Secretary must reassess his position. I am in no doubt the land owners will be the ultimate winners as against the public gangsters hiding behind the façade of law.

Gambians are outraged and rightly so by the killings of George Floyd, and Lamin Sisay in the United States of America. I hope we direct part of that energy for justice to victims of Government lawlessness at home over lands in Salagi and elsewhere.