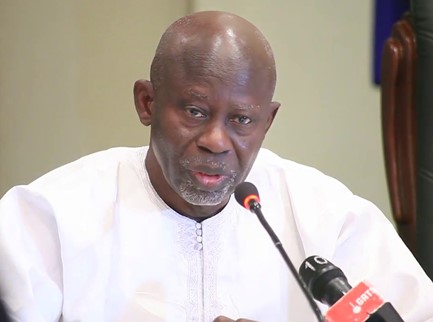 Ousainou Darboe was born in 1948. He is the son of Numukunda Darboe, who served as a member of parliament for Lower Falluda West, and as communications secretary for Pierre Sarr N’Jie‘s United Party.

Darboe attended Bansang Primary School and then proceeded to Banjul, where he studied at Saint Augustine High School and Gambia High School. Darboe was a recipient of a Commonwealth scholarship to study law at the University of Lagos in Nigeria. He later studied for a master’s degree in law from the University of Ottawa, Canada.

Darboe was called to the Federal Bar of Nigeria in 1973 and returned to the Gambia in May 1973 to take up a role as a state prosecutor. He was called to the Gambian Bar in November 1973, becoming the first Gambian lawyer from the Mandinka ethnic group. He then worked at the Attorney General’s Chambers, firstly as a state counsel, then as acting registrar-general, and then as a legal draftsman, before resigning in 1980 in protests against the government’s use of draconian legislation to suppress opposition.

Darboe then entered private practice, working as a human rights barrister. He founded Basansang Chambers in 1980. He was later joined as a senior partner by Neneh M.C. Cham and Lamin Darboe. Darboe is credited with having saved the lives of over 200 Gambians from the death penalty. Following the failed 1981 coup against Dawda Jawara‘s government, Darboe successfully defended many involved, including Pap Cheyassin Secka and Sheriff Mustapha Dibba who were both tried for treason. Darboe also represented the majority of those detained under ‘Emergency Powers’ following the coup.

He has worked as a legal advisor to many major Gambian companies and organisations, including Gamtel, Continent Bank (which dissolved in 2003), Gambia Public Transport Corporation, and the Social Security and Housing Finance Corporation. He also continued to provide advice and representation on a pro bono basis. He served the Gambia Bar Association for several years as its vice president and was also a member of the National Advisory Committee on the selection of judges to the International Court of Justice.

1994 in the Gambia saw a military coup, propelling Yahya Jammeh into the role of head of state. In August 1996, Darboe founded the United Democratic Party based on “democracy, constitutionalism and the rule of law”, and became its first leader. He first ran for president in the 1996 presidential election, where he came second to Jammeh, winning 35.84% of the vote to Jammeh’s 55.77%. However, the election was widely criticised by observers for its flaws.

In June 2000, while on the campaign trail for the 2001 election, his convoy was ambushed by supporters of the Jammeh regime. One attacker, Alieu Njie, was killed in the process. Darboe and 20 others were arrested and held in Basse police station before being transferred to the high court in Banjul and being granted bail.

He ran again in the 2001 election, representing a three-way coalition of the UDP, the People’s Progressive Party (PPP), and the Gambian People’s Party (GPP). He again finished second behind Jammeh, winning 32.59% of the vote. In 2005, the UDP joined with four other opposition parties to form the National Alliance for Democracy and Development (NADD), in preparation for elections in late 2006 and early 2007. The alliance, however, disintegrated after the UDP and the National Reconciliation Party (NRP) withdrew in early 2006.

By the time the presidential election was held in September 2006, Darboe’s UDP had formed another coalition with the NRP and the Gambia Party for Democracy and Progress (GPDP) called the ‘Alliance for Regime Change’. In the election, Darboe’s running mate was Hamat Bah. A United States diplomatic cable describing the election candidates called Darboe the “perennial candidate”. It speculated by his opponent that Darboe seemed “to be relying on tribal loyalties to secure victory at the polls”, and also noted that “it is not clear whether he would be a reliable ally for the U.S.”. Jammeh won the election with 67.33% of the vote followed by Darboe, who won 26.69%. A third candidate representing the remaining NADD parties, Halifa Sallah, finished a distant third with 5.98% of the vote. Darboe rejected the official results of the election, saying that the election was not free and fair and that there was widespread voter intimidation.

Darboe was arrested in April 2016 for participating in protests demanding the body (dead or alive) of his party’s Youth Leader, Ebrima Solo Sandeng, who was arrested by the state security agents, tortured and eventually died in custody, a day after his arrest. Darboe remained in jail, during the period leading up to the December 2016 presidential election, and in his absence, Adama Barrow, a businessman without political experience, was designated as the party’s presidential candidate( with Darboe’s endorsement). In a shock result, Barrow, as the joint opposition candidate leading Coalition 2016, defeated Jammeh in the election. A few days after the election, Darboe was among 19 members of the opposition released from prison.

On 1 February 2017, Darboe was sworn in as Barrow’s Minister of Foreign Affairs. The next day, he met with foreign diplomats accredited to the Gambia to “strengthen bilateral relations between the Gambia and the world”. The same week as his swearing-in, it was confirmed that €33 million in foreign aid from the European Union that had been frozen under Jammeh’s regime would be released to the Gambia.

In late 2017, Darboe courted controversy when he demanded that the president of Togo, Faure Gnassingbé, resign due to massive anti-government protests. He withdrew the statement a few days later.

Darboe is married to two wives and several children. His eldest daughter, Mariama, is a graduate of Tulane University in the United States. He is a sports enthusiast and served as vice president of the Gambian National Olympic and Sports Committee for several years, as well as chairman of the Gambia Wrestling Federation.

Though he has never won an election in The Gambia, Darboe is said to be a crowd-puller. He is contesting for the presidency under the United Democratic Party (UDP).

Ousainou Darboe is one of six candidates being validated by the Independent Electoral Commission (IEC) for the 4 December 2021 presidential election.